Get the latest news for nurses
INDUSTRY
November 20, 2018

A new study published in the Journal of Nursing Education has found that Baylor University’s innovative “2HeadsR>1” pilot program for nursing education is effective. The program launched an education model based on pairing up nursing students to work as one nursing unit to approach patient care. The two nursing students, acting as one “nurse,” worked together to collaborate on ideas, share information and assessments, and make clinical decisions for their patients.

The study explained that the program, piloted by Louise Herrington School of Nursing in 2017, was designed as a way to focus on “collaboration and prioritization,” while also highlighting critical thinking in the students’ training. As opposed to traditional nursing structuring, which dictates a “head” nurse and many different nurses under him or her tasked with caring for their own respective patients, in this program, two nurses are paired together and instructed to “move and act as if they are one person.” Using a literal Two-Heads-Are-Better-Than-One Strategy, the journal noted that the new approach allows nursing students to divide and conquer care together.

Check it out: Top 10 Tips - How To Pass The NCLEX The First Time.

How the 2-Nurse Program Works

In a press release, Baylor nursing school Director of Simulation Jeanne Carey, R.N., detailed how the program was designed to work. The nurse, who runs the healthcare simulation at the school, noted that the “Two Heads Are Better than One” approach helps students have a more realistic approach to treating a patient while also empowering them against the overwhelm that can come when working alone as a new nurse. She and her team found that students were often reluctant to act independently when practicing patient care during a simulation; students were anxious and held back on making decisions, which ultimately inhibited learning. By introducing a team care approach, students were more empowered to take action and, in the process, learn effective nursing skills.

“Having the two students act as one nurse forces them to stick together and prioritize,” she explained. “Prioritization is something they had struggled with, but it’s one of the most important skills they will need when they graduate and start practicing as a nurse.”

Working off students’ feedback that the traditional “divide and conquer” approach in simulation, which saw students split up and assigned specific roles, such as one nurse giving out medication, one documenting, and one assessing, did not mirror a nurse’s real-life scenario, the nursing educators at Baylor introduced the new program and tested it during simulation scenarios.

A Focus on Critical Thinking

One of the primary pillars of the two-nurse approach is a focus on critical thinking. After observing students’ reluctance to act during patient care simulations, Baylor educators instituted a “Think Aloud” method, which has the students talk through their thought processes, decision-making, and ultimate agreement on the best plan of care for their “patient.” Hearing other students’ critical thinking processes ultimately benefits everyone, especially those who may be thinking in a different way. And unlike in the real world, depending on the scenario, students may even have the opportunity to “rewind” a scenario, if their critical thinking process reveals that they have made a mistake in their care. The focus is on learning before they graduate and that’s exactly what the program allows them to do.

By encouraging all students to participate and “think aloud,” all students are then able to learn in a supportive and collaborative environment. In real-life, mistakes and even uncertainty can be deadly, but in the lab, it’s a crucial time for students to learn the importance of speaking up, working together, and making critical decisions. The team approach also highlights one of the most important lessons a nurse can ever learn: when to ask for help.

Innovation for the Future

While Baylor University didn’t invent the paired-student program (it has been around since the 1990s), Carey did note that their school was a leader in utilizing the approach in a simulation setting. She and her team found that the research surrounding the approach was based on proven cognitive science; previous studies have found that two people working together will perform more effectively than one individual acting independently, an act called collaborative cognition. 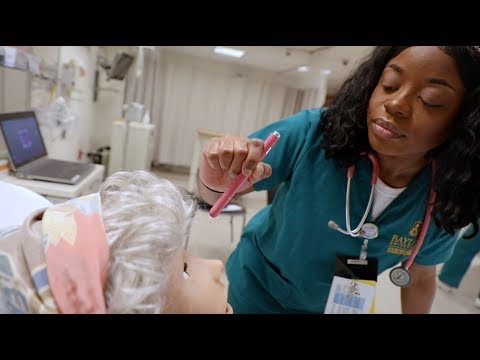 Using the approach at the learning level not only improves the educational experience students are getting, but from a nursing education perspective, it is a zero-cost intervention to enhance learning and empowers student ability. Students who have gone through the program have found it favorable as well, remarking on its unique ability to help them sort their own limitations as a new nurse to focus on patient care.  “Having someone next to me to consult with and bounce ideas off made the whole experience less overwhelming,” one student wrote in an evaluation.

So, will the 2HeadsR>1 program change the way that student nurses are educated for good? Time will have to tell. Baylor University plans to continue implementing the program and assessing how future nurses who utilized the approach in their training found the model beneficial in preparing them in their real-world careers.

Next Up: 5 Types Of Nursing Students - Which Are You?