In November 2018, Nurse.org was the first publication to interview nursing student, Rosa, about her challenges taking the NCLEX after the DACA program was upended. At that time all DACA recipients were banned from sitting for the NCLEX nursing exam. She would have had to go out of state to test and would not have been permitted to work in Arkansas as a licensed registered nurse.

Since then, Rosa's story has garnered attention from government officials in Arkansas and the national media. Rosa's efforts were pivotal in changing the laws for DACA nursing students in Arkansas - with more states to follow.

No Clear Path To Citizenship For DACA DREAMers

Rosa is one of the United States’ estimated 800,000 children of undocumented immigrants and DACA recipients brought into the country as a child. Rosa barely remembers the process of her parents bringing her into the U.S. when she was only six years old — “it was like a dream,” she recounts, an apt description since she’s one of 3.6 million children of undocumented immigrants often called “DREAMers,” after a failed legislation of the same name.

For individuals like Rosa, who entered the U.S. as children and who have grown up in the country, but have undocumented parents, there is no clear path to citizenship. Children of undocumented immigrants typically have four options to become legal residents:

After the DACA developments, Rosa became involved in advocating for legislative changes at both the local and state levels. She joined the state Board of Directors with the Arkansas Nursing Student's Association and pushed to change in the law in their state, knowing that there was a good chance that these changes wouldn’t come in time for her own graduation.

Her efforts caught the attention of both the media and lawmakers. After an interview with the Arkansas Democrat-Gazette, she was contacted by Representative Megan Godfrey who went on to lead a partisan effort to create legislation that would allow Dreamers to take the licensing exam. Fortunately, the bill was passed in both the House and the Senate.

In April of 2019, Rosa traveled to the state capitol to watch as Governor Asa Hutchinson officially signed the bill HB1552 into law. Recently, Nebraska and Indiana have passed similar laws and it looks like South Carolina will be the next to follow. These changes signal a significant shift in thinking and more states are working to make sure Dreamers are able to contribute to their communities and that more Hispanics and other foreign-born citizens have a path to becoming a healthcare professional.

Despite Rosa’s successes, DACA is still under threat, especially at the federal level. While her story has a happy ending and she will be graduating this December and taking the nursing exam in Arkansas, there are plenty of other Dreamers who are fighting for the same opportunities in their own state. Ideally, the laws will change on a federal level and more people like Rosa will be able to fulfill their dream of becoming a nurse. 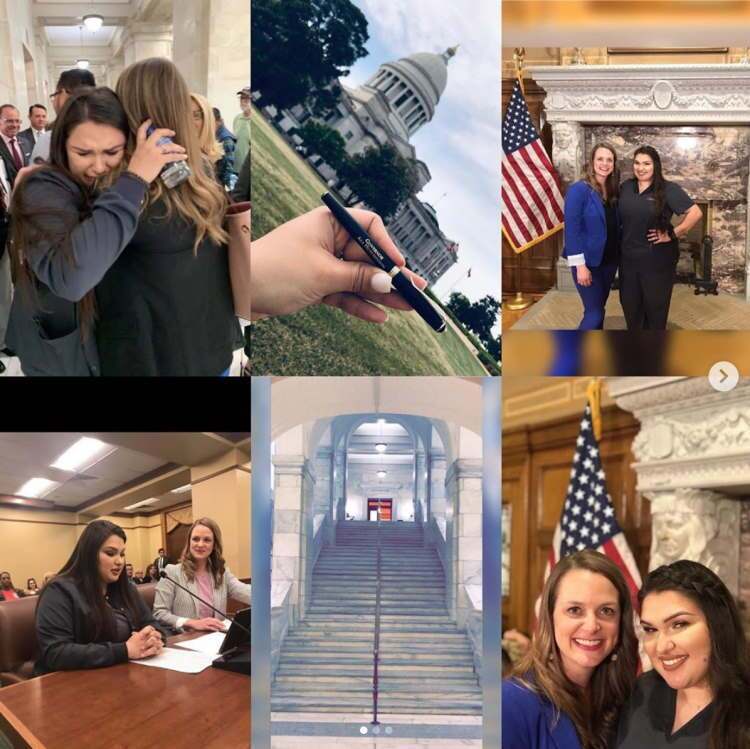 You’ve known you wanted to be a nurse for your entire life and you’ve spent the last six years working 2-3 jobs in order to pay for nursing school. You’ve spent countless hours studying, hoping, and praying for the moment you would be able to give back to the family who sacrificed so much to get you to this point when you are told something shocking:

You won’t be allowed to take your NCLEX exam.

Rosa, 24, a nursing school student at the University of Arkansas for Medical Sciences College of Nursing, set to graduate in December of 2019, was facing that exact situation. Despite the obstacles ahead of her, however, she was determined to find a way to complete her nursing degree.

The Challenge for DACA College Students

Without a clear road to U.S. citizenship possible for her, Rosa has been able to attend school and work as a result of the DACA program, Consideration of Deferred Action for Childhood Arrivals, which was established in 2012 under the Obama administration as a way for children of undocumented immigrants to have a chance to work and attend school legally. The program laid out basic guidelines and required applications to renew their DACA status every two years.

Rosa explains that the renewal process isn’t exactly simple; not only does it require her to travel to Tennessee every 2 years for her biometrics meeting, where her fingerprints and picture is taken, but the application and attorney fees cost her upwards of $1,000 each time. And yet, she maintains a positive attitude about what she has to go through.

“It’s not like it’s easy, but honestly, it’s better than nothing,” she says.

Thanks to DACA, Rosa has been able to legally attend school and find employment in the U.S. In fact, Rosa has had to work extra hard because since she is not a U.S. citizen, she can’t get federal loans or financial aid, so she has had to work 2-3 jobs at a time to pay for her schooling.

She’s worked so hard because she is determined to become a nurse. Not only is Rosa passionate about her chosen career path to ensure a more visible Hispanic presence in healthcare, but she says she has always wanted to care for others and make a difference.

“I’ve always had that heart, and it’s been instilled in me to help,” she explains. “Ever since I was little watching the St. Jude’s commercials, I would cry and think, ‘I want to help those kids.’ A lot of little things have helped me feel like it was my destiny.”

Her destiny to becoming a nurse, however, was being threatened as the DACA program was upended by the Trump administration during the fall of 2017. Over the years, there have been various starts and stops to the program, as well as state lawsuits against its termination, but the ramifications of the uncertainty of DACA had a devastating impact for Rosa — the Arkansas State Board of Nursing determined that DACA recipients would not be eligible to sit for the NCLEX nursing licensure exam.

Rosa recounts that the night she found out that she would not be able to take the NCLEX was the same night she had participated in her nursing school’s white coat ceremony. She had returned from the festivities and logged onto Facebook only to see an article pop up about the decisions.

“I started to read it and I just started crying,” she remembers. “It’s always been a fight, trying to prove yourself, paying out-of-state tuition, seeing all your friends graduate before you because you don’t have the means to take all your classes and not work; it’s just another hit to the stomach — you’ve gotten this far but the fight isn’t over: here’s another hurdle.”

Keeping The Dream Alive: Next Steps

After her school officially broke the news to her, they offered her two options:

At the time, Rosa was the only student in her immediate nursing program who was faced with being barred from taking the NCLEX, although she knew there were others like her across the country.

The challenges for students like Rosa are immense, as many don’t have the necessary funds to travel to a state that allows them to be tested for licensure.

“It’s difficult because there are not as many Latinos in healthcare,” she notes. “I want to change that but you have to fight; it’s always been a fight to prove your worth and stuff like that just makes it even harder.”

Going Out Of State To Take The NCLEX

With her graduation a little over a year away, Rosa’s plan was to go to one of the four states that will allow former DACA recipients to sit for the NCLEX

During this period of uncertainty, Rosa felt defeated but remembering how hard she had worked and how much her mother had sacrificed for her kept her going.

“It’s something that I’ve been working towards and fighting for, six years,” she notes. “I’m going to be 25 by the time I finish, not because I wanted to be, but because that’s the situation. It’s about perseverance; just because I hit a hurdle in the road, I can’t quit. I have to shake it off.”

While Rosa’s path to becoming a nurse has been full of challenges, she has been able to take something positive from the entire experience: “I’m determined to make the most of it, because if I’ve learned one thing, it’s that in America, you should never give up on living your dreams.” Hopefully, her story will inspire others to talk more openly about their own experiences as Dreamers and these conversations will bring about both awareness and change. The nursing profession would be lucky to have more people like Rosa who demonstrate an incredible work ethic and determination to succeed.