Shaquille Dukes, 24, was being treated for pneumonia and still attached to his IV when a security guard called police.

Shaquille Dukes, 24, a black, male patient at FHN Memorial Hospital in Freemont, about 100 miles out of Chicago, is claiming that while taking a walk during his hospital stay on June 9, a security guard called the cops on him, citing that he was attempted to steal medical equipment. Both Dukes, his boyfriend and another male companion were arrested and charged with misdemeanor Disorderly Conduct, according to a statement from the Freemont Police Department. At the time the security guard called the police, Dukes was still dressed in his hospital gown and was attached to an IV that was infusing both antibiotics and steroids into his arm.

In a Facebook post, Dukes says the entire situation was entirely racially-motivated, writing that he “was stopped by an overzealous, racist, security officer, who claimed that I was trying to leave the hospital to sell the IV equipment on eBay’.” The young man also went on to describe how both he and his brother were arrested, his IV was removed, and he was transported downtown to “city lockup,” where officers repeatedly refused his requests for his inhaler until he suffered an asthma attack that left him “unresponsive.”

Video that Dukes posted shows the men arguing with the police officers, at one point calling one of the officers a “f*ing re*#rd” along what appears to be a sidewalk outside of the hospital. In one of the videos, Dukes’ IV has been replaced with a white bandage.

“I make this post not for pity, but as a beacon of hope for all black and brown minorities dealing with the City of Freeport, we do not have to take this shit any longer!” Dukes summed up in his post. “I've shared contact info for a great attorney who is ready and willing to intervene. This ends today, anyone who sees this, and has been served an injustice or was a victim of a crime initiated by Freeport PD, please reach out.”

Are Patients Allowed to Walk Outside?

One of the aspects of this story that many people have focused on is why Dukes was walking around with his IV pole outside in the first place, and if he had voluntarily chosen to leave hospital property with the IV pole. According to some, the security guard had notified Dukes that he was off hospital property and needed to return, at which point, the patient became argumentative, prompted the guard to call for police back-up. According to Dukes, however, the guard instead immediately accused him of stealing medical equipment, asked no questions about his safety, forced him off hospital property, and immediately called the cops on him.

From a nursing standpoint, I can say it’s not always common to allow patients to walk outside, simply due to the variables that can happen if a patient is outside, like injury, risk of the patient leaving AMA, or even smoking—the #1 request I got as a nurse was for a patient to “go outside,” but in reality, they wanted to smoke, which in this case, considering the patient had pneumonia, could definitely have been doubly dangerous. That being said, letting a patient get some fresh air, with permission from the doctor and nursing staff, could happen and it depends widely on the hospital and floor policy, the specific circumstances of that patient, and of course, his or her prescribing physician.

In this case, it’s still a bit unclear if Dukes truly had permission to be walking around outside with his IV pole. His Facebook post describing the situation details that he received doctor’s orders to “walk around,” but at first glance, as a nurse, I would take that to walk the halls or walk his room, not take a walk outside, simply out of concern for the patient’s safety, as he wouldn’t be able to be monitored unless a nurse or aide accompanied him, which clearly did not happen. With a double diagnosis of pneumonia and asthma, oxygen levels can be severely depleted very quickly, so one would think walking outside could trigger a reaction, rendering it hard for the patient to breathe and/or make it back to the hospital safely.

Two Sides of Support for Shaquille

Based on social media, Shaquille is getting both sides of support—with some dissenters, and others backing his story 100%. “According to Shaquille, he is an asthmatic that was admitted the day before for double pneumonia,” wrote one disbelieving commenter on his Facebook post. “There is no way he would have enough energy and stamina with those conditions to just walk down the hospital hallway let alone outside and off the property. There is no way a licensed physician would approve of someone in that condition to be out of their bed let alone on a walk outside the hospital. The doctor definitely would not approve of their patient leaving hospital grounds while still attached to an I.V.”

Others, however, pointed out that he could have accidentally left hospital property, or that the encounter with the guard and police led to him leaving the hospital grounds. “He literally says in the video he was taken off hospital property,” wrote one supporter. “They removed him from hospital property onto public property to arrest him for being on public property....does that seem fair to you in any way? what's your solution then? resist the police officer and get shot?”

Regardless of if Dukes should have been walking outside or not however, the only reason that a security guard should have been concerned was out of fear for the patient’s safety and his safety alone—not out of fear that a patient dressed in a hospital gown still attached to an IV pole was stealing medical equipment. I mean, really?

What the Cops Say

At the moment, the Freemont police has officially stated that the security guard that called the police was not associated with either the police department or the hospital, that all three men were arrested for the misdemeanor of Disorderly Conduct, two were also charged with an additional count of the misdemeanor of Resisting or Obstructing a Peace Officer, and that the sidewalk where the arrest took place was just adjacent to hospital property. Their official statement also declared that several social media posts about the incident contain “inaccurate information.”

“The Freeport Police Department urges the public to reserve judgment while a complete review of the incident is performed,” their statement reads. “Additional information will be provided by the Department once all information has been reviewed. The Department will continue to respond to requests for assistance in a manner consistent with our mission statement of providing and maintaining a safe living and working environment for the citizens of Freeport.” 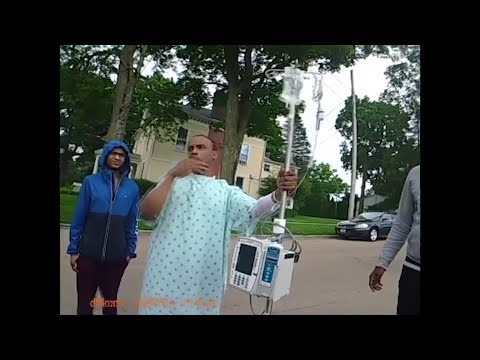