The viral video of a Florida Doctor yelling at a sick patient to “get the hell out” only tells half the story - as most last-minute videos on Facebook do. There’s a lot more the video does not show and, Dr. Peter Gallogly of Gainesville After Hours Clinic, has the police reports to show.

Stipe said she was "in severe pain and throwing up in the trash can" when she complained about the long wait time. She proceeded to ask for her copay to be returned. 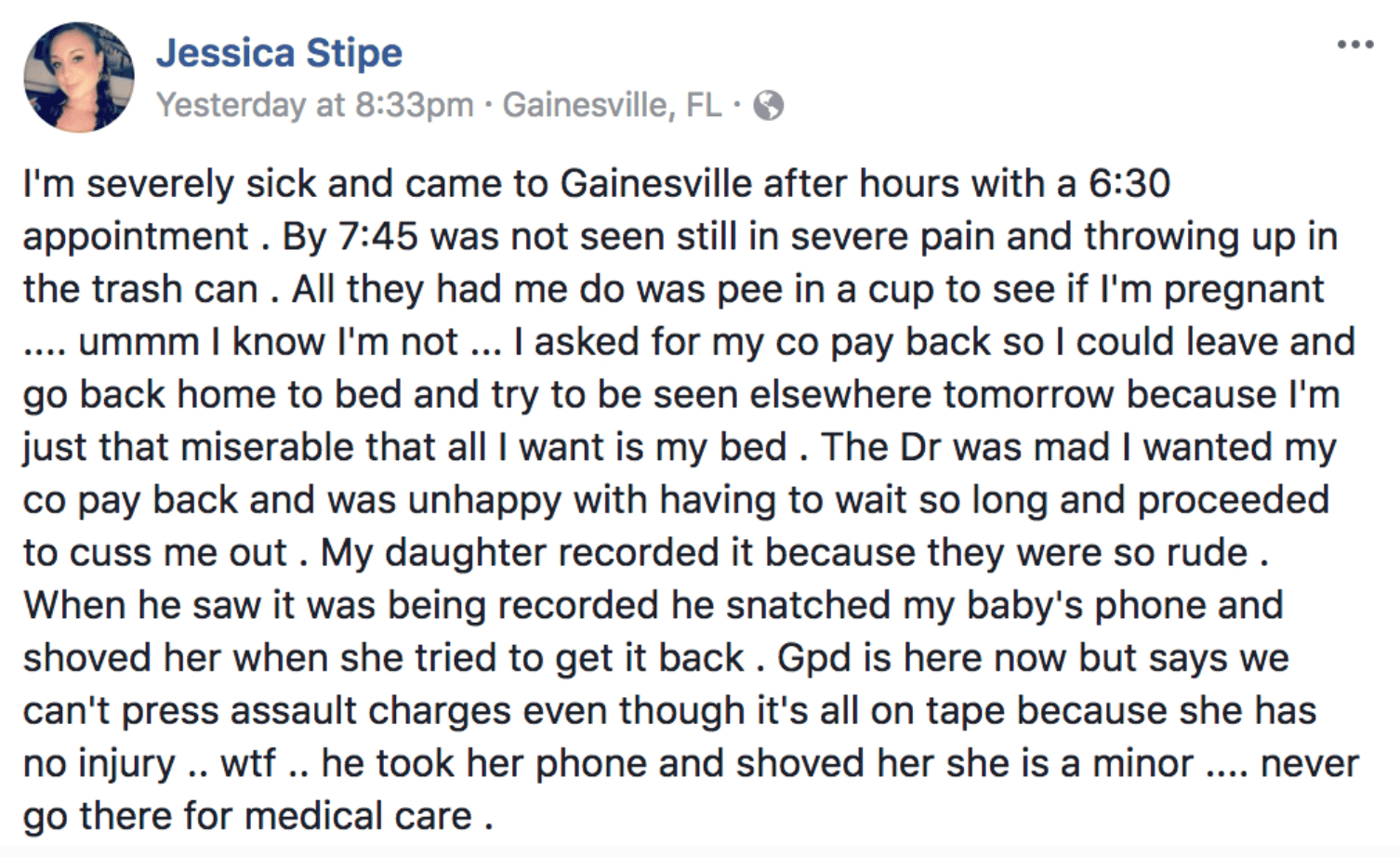 In the video, Dr. Gallogly and Stipe are heard in a heated debate regarding urine tests and wait times.

Towards the end of the video Gallogly asks Stipe, “Do you want to be seen or not?” to which Stripe replies, “I want to go home and get in my bed.”

Gallogly replies, “Then, fine, get the hell out,” as he points toward the door. A few seconds pass and Stipe does not leave, Gallogly again demands, “Get the f--- out of my office,” and escorts her to the door.

It is at this point when Stipe’s daughter remarks that she’s been recording the confrontation - Dr. Gallogly snatches the phone and walks away with it.

That is the video that has been circulating the internet. It’s a minute long. So, what happened during the rest of the time Stipe was waiting? Was she patiently waiting? Not so fast.

The Missing Parts Of The Story

According to the official statement that the Gainesville After-Hours Clinic released on Facebook, the two women had been increasingly abusive throughout their 1.5-hour long wait. The clinic included in their statement eyewitness accounts and the official police report of the incident. 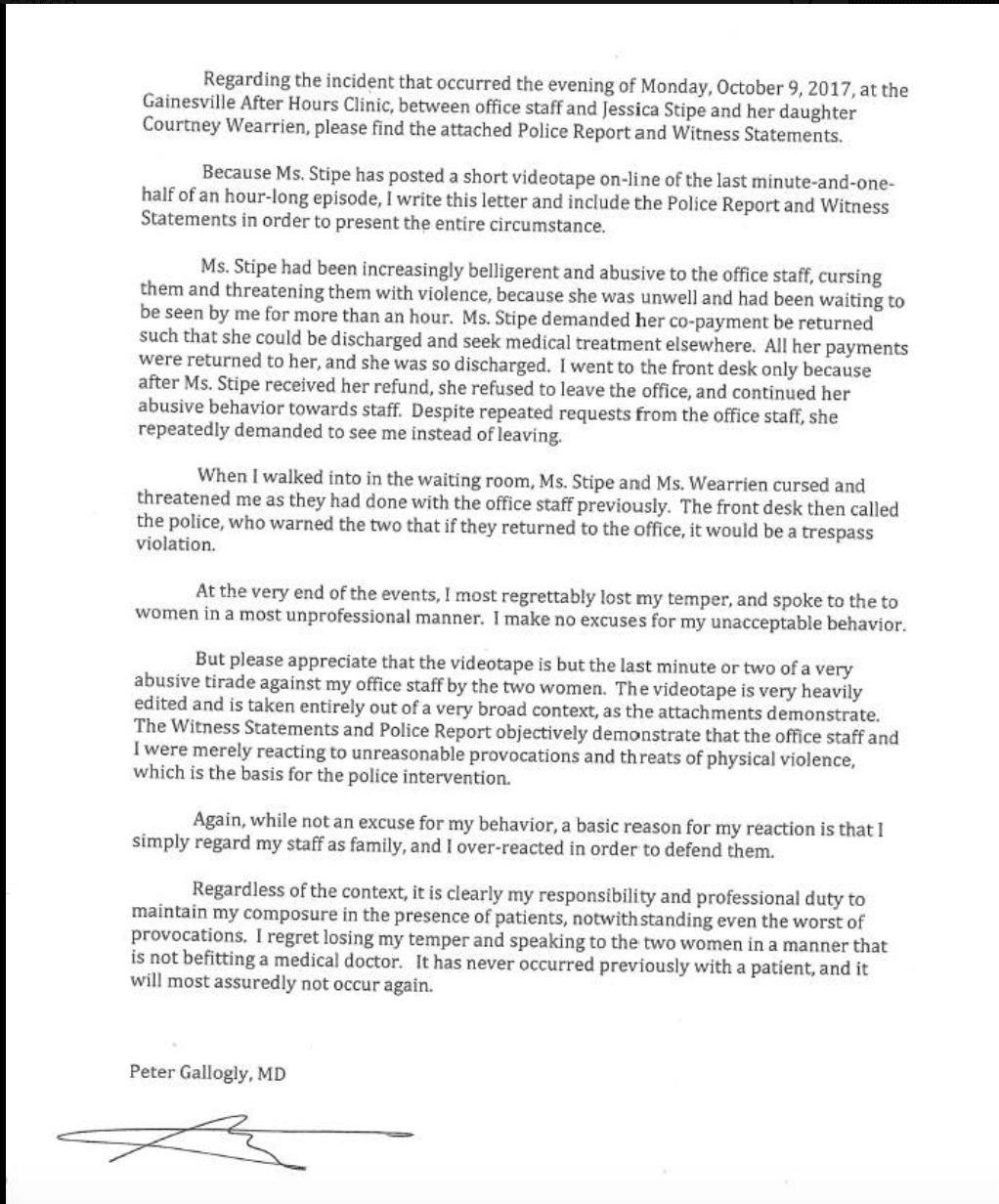 “Ms. Stipe had been increasingly belligerent and abusive to the office staff, cursing them and threatening them with violence because she was unwell and had been waiting to be seen by me for more than an hour.

I went to the front desk only after Ms. Stipe received her refund, she refused to leave the office and continued her abusive behavior towards the staff. Despite repeated requests from office staff, she repeatedly demanded to see me instead of leaving.

When I walked into the waiting room Ms. Stipe and Ms. Wearrien cursed and threatened me as they had done with the office staff previously.

The front desk then called the police.

At the very end of the events, I most regrettably lost my temper and spoke to the two women in a most unprofessional manner. I make no excuse for my unacceptable behavior.”

The Doctor closes his statement, “the witness statements and police report objectively demonstrate that the office staff and I were merely reacting to unreasonable provocations and threats of physical violence which is the basis for the police intervention.”

There are a total of 4 other eyewitness accounts of the incident cited by office staff in addition to a police report. 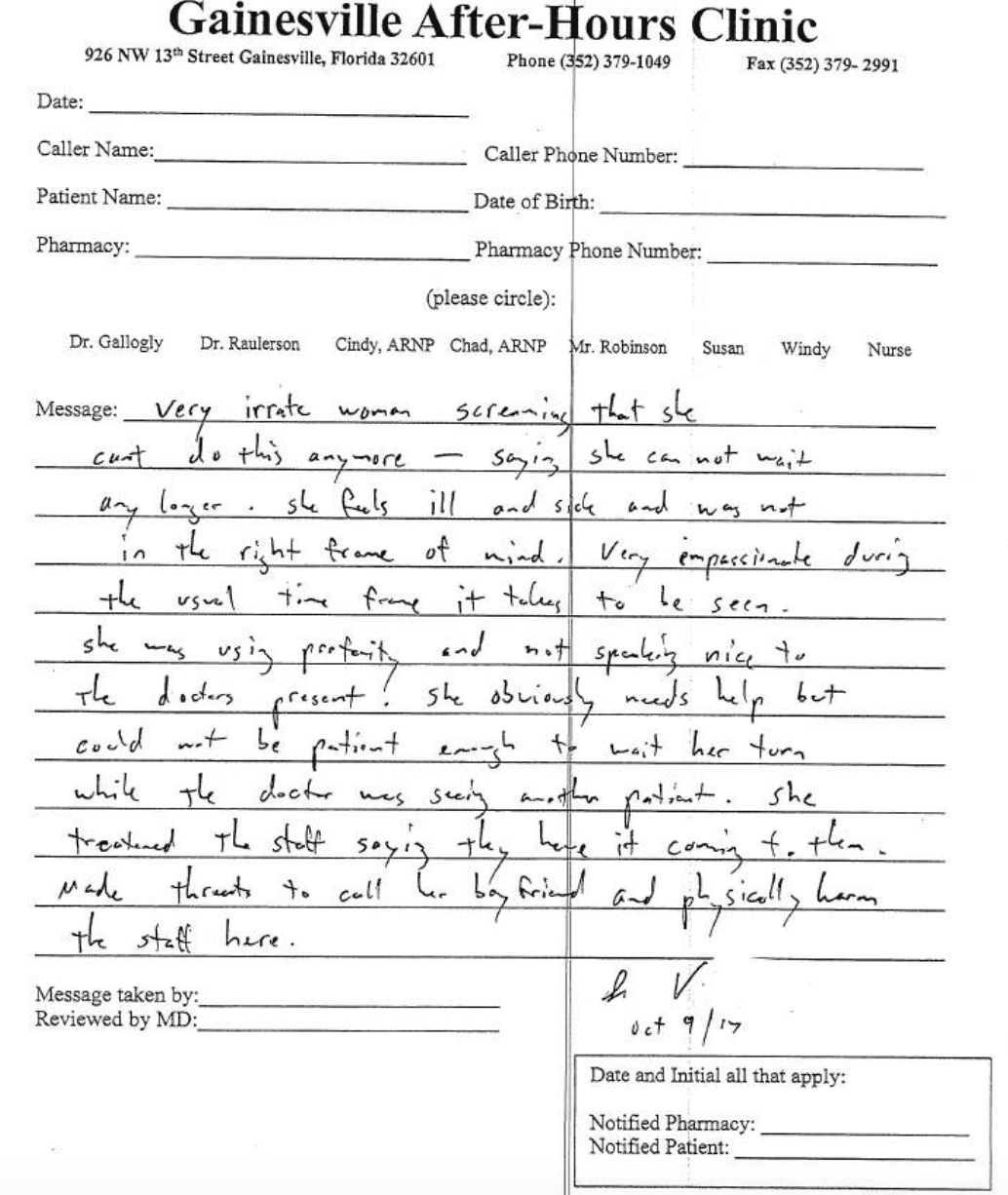 In all four statements staff report Stipe as being “very irate, using profanity and screaming she can’t do this anymore.” they also report that she threatened the staff by stating that they, “have it coming for them” she continued the threats, saying she would “call her boyfriend and physically harm the staff there.”

One staff member wrote, “I overheard this girl yelling at Dr. Gallogly saying that she was going to get her big black dad to come back and kick his a--. The girl’s mother yelled, ‘don’t touch my daughter.’ Which Dr. G didn’t touch the girl.” 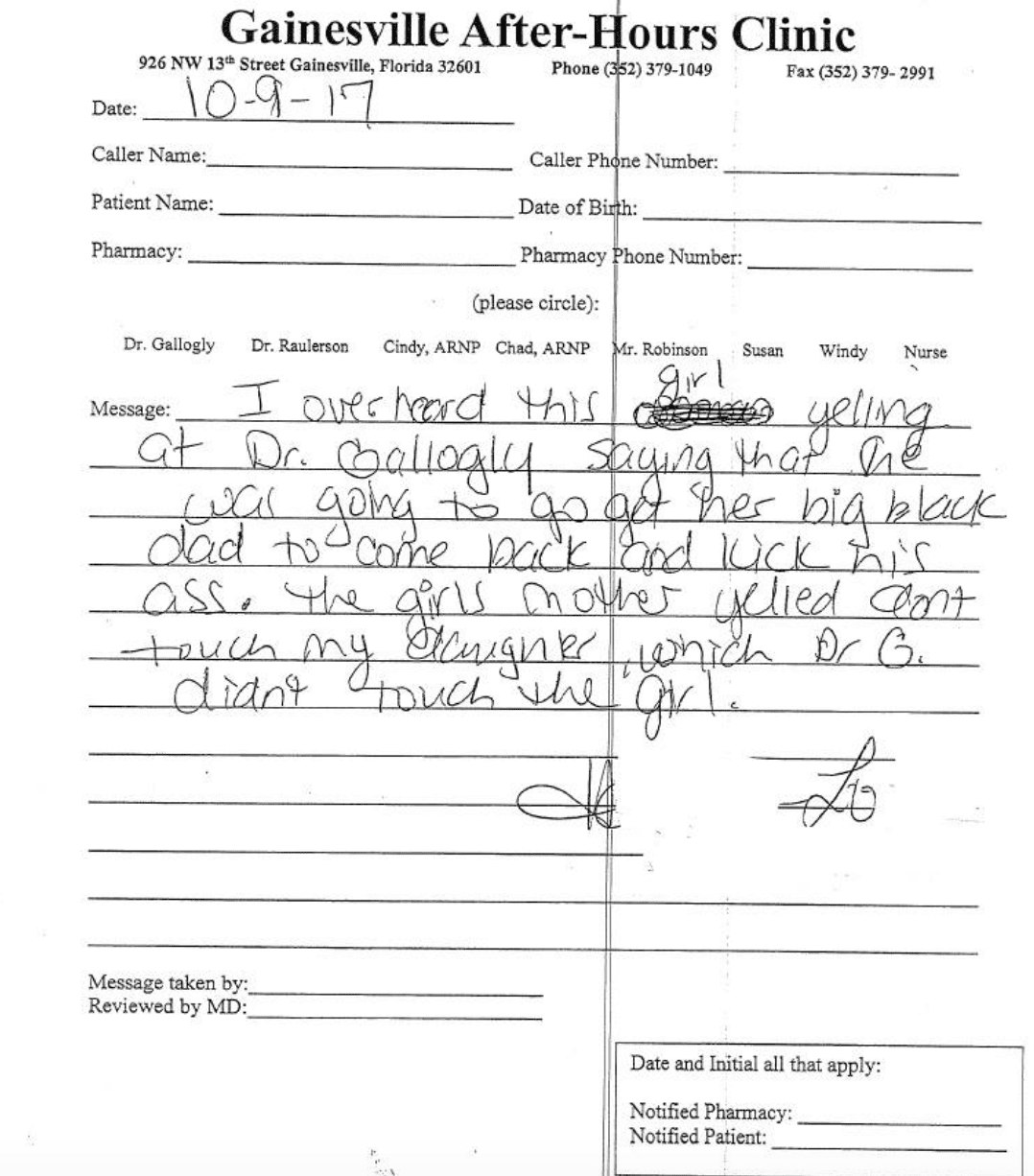 The official police report explained the incident in further detail. Regarding the alleged reports that the Doctor pushed Stipe’s daughter, the officer reports, “from the video it cannot be clearly seen if Gallogly pushes or shoves Wearrien on the shoulder.” He continues, “I do not have reason to believe that Gallogly struck or pushed Wearrien in the shoulder where she advised.”

Was The Doctor In The Wrong?

Admittedly, Dr. Gallogly overstepped his boundaries. Did he lose his temper? Yes. Is there more to the story? Also, yes.

Patients who visit Urgent Care are there because they are seeking immediate care. Unfortunately, in most cases, they have to wait. As a whole, we don’t know what was going on in the other rooms and why Stipe had been waiting to be seen.

We do know that this video only shows a small portion of a much larger story.