Get the latest news for nurses
NEWS
December 6, 2017

'Help Me Find The Nurse Who Saved My Life' - Teen's Video Goes Viral.

Support is coming in from around the world for a young man who shared a compelling Christmas wish on Facebook video. Caleb Johnson’s wish this year was to find the nurse who miraculously saved his life 17 years ago.

At the age of one, Johnson and his family were involved in a motor vehicle accident that claimed the lives of his parents and injured his four siblings. Caleb endured the most traumatic injuries to his head - his veins collapsed, making it nearly impossible to administer life-saving medication. Thanks to a dedicated, skilled, quick-thinking nurse, Caleb is able to tell his story today. 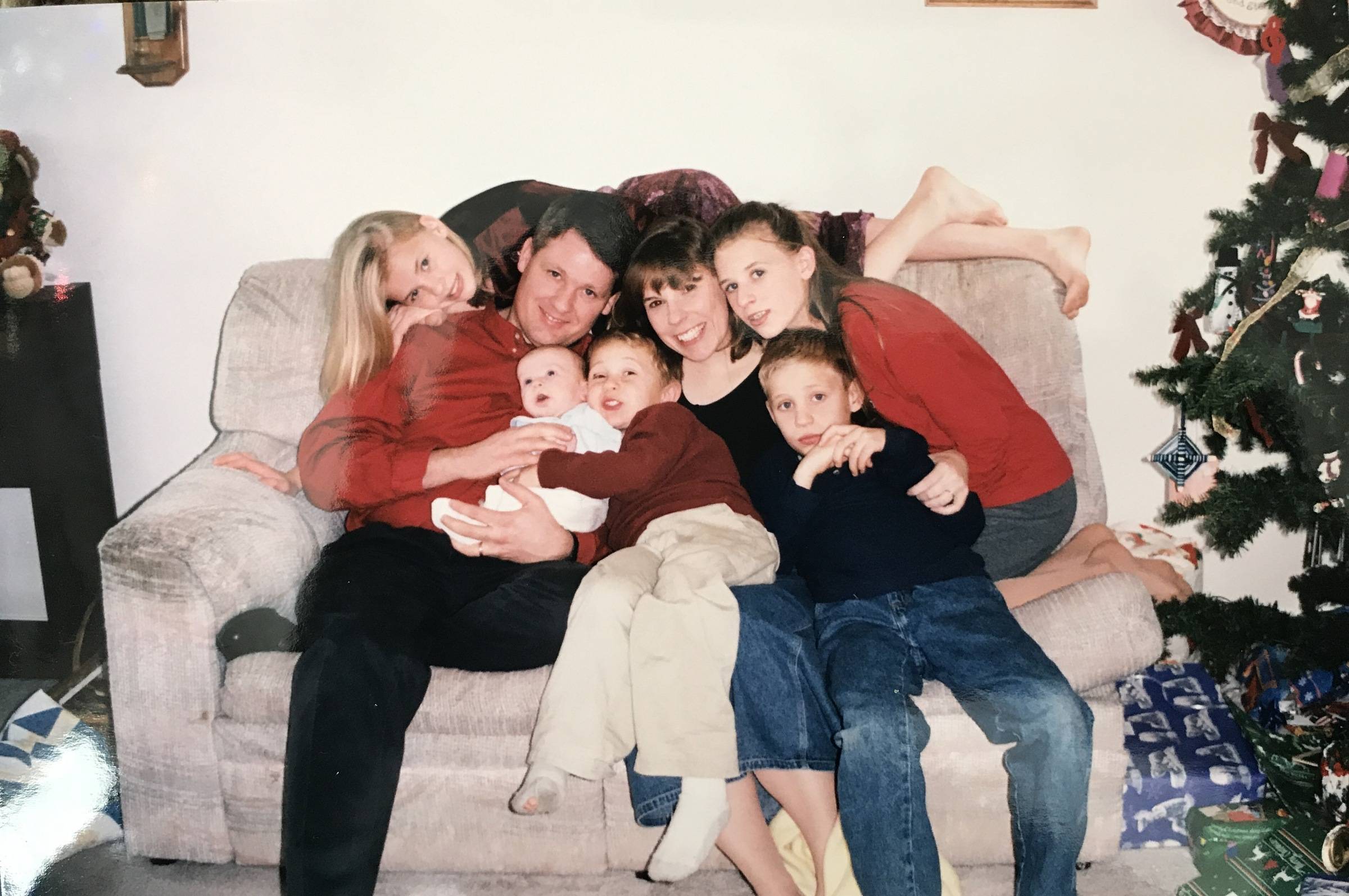 Though he was too young to remember the accident, Caleb grew up hearing the story of the staff at Medical City McKiney (formerly, North Central Medical Center) - especially one nurse in particular who went above and beyond to save his life.

About 1 year after the accident, Caleb's Grandmother received a phone call from a nurse who recalled the events of that day.

On November 22, 2000, the Johnson’s had embarked on a 3-hour road trip from their home in McKinney to Austin TX to celebrate Thanksgiving with family. Caleb was situated in his car-seat behind the driver, his Mother. The vehicle was struck by an 18-wheeler as it passed through an intersection. 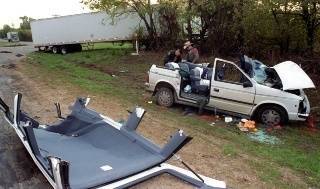 Caleb was removed from the vehicle through the window and paramedics immediately administered life-saving efforts. He had suffered severe head-trauma including multiple skull fractures.

His sister, Kirsten Johnson Moody who was 12 at the time, recalled that day, “They made me sit in the front. They said it was so I would be more comfortable, but I knew that wasn’t the real reason. They didn’t think Caleb was going to make it.” 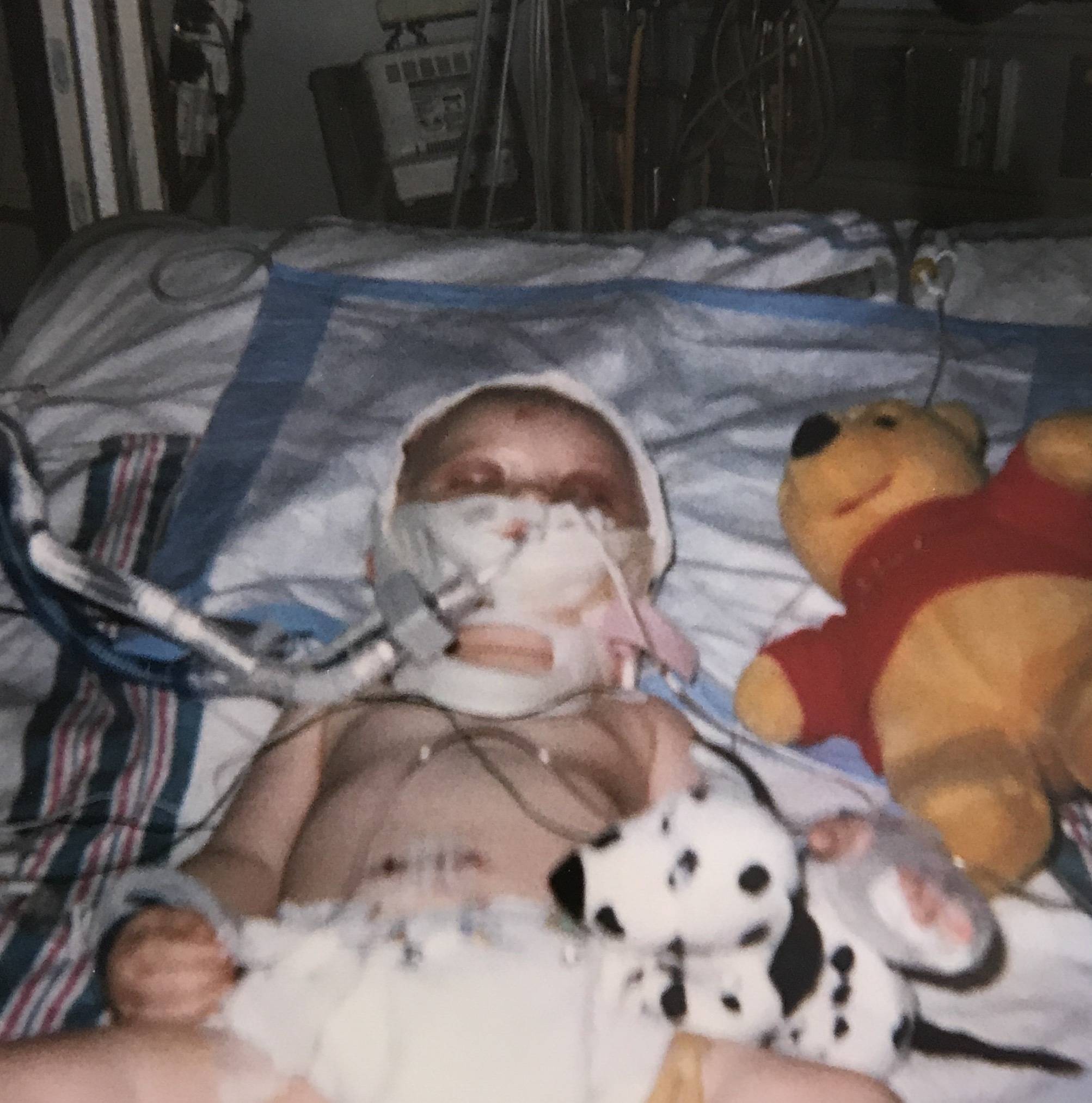 When they arrived at the hospital, a nurse was tasked with starting the IV that would deliver life-saving medication to his body. She soon discovered that his veins had collapsed.

This nurse was determined to save baby Caleb’s life - she tried inserting the needle into various spots on his body and using multiple techniques. Despite her persistence, all attempts failed. At this point, we were told, it was time to give up - the nurse must have known that as well.

The Nurse who refused to give up

Instead, she turned her head towards the sky and prayed with tears in her eyes. She decided to give one last technique a try - it was now or never. Making a small incision into Caleb’s tiny ankle - a procedure called intraosseous infusion - she was able to administer medication directly into his bone marrow.

Caleb has undergone many procedures since that day to recover from his traumatic brain injury but, he credits this one nurse for his survival.

I’d tell her, “thank you for not giving up on me,” Caleb remarked. 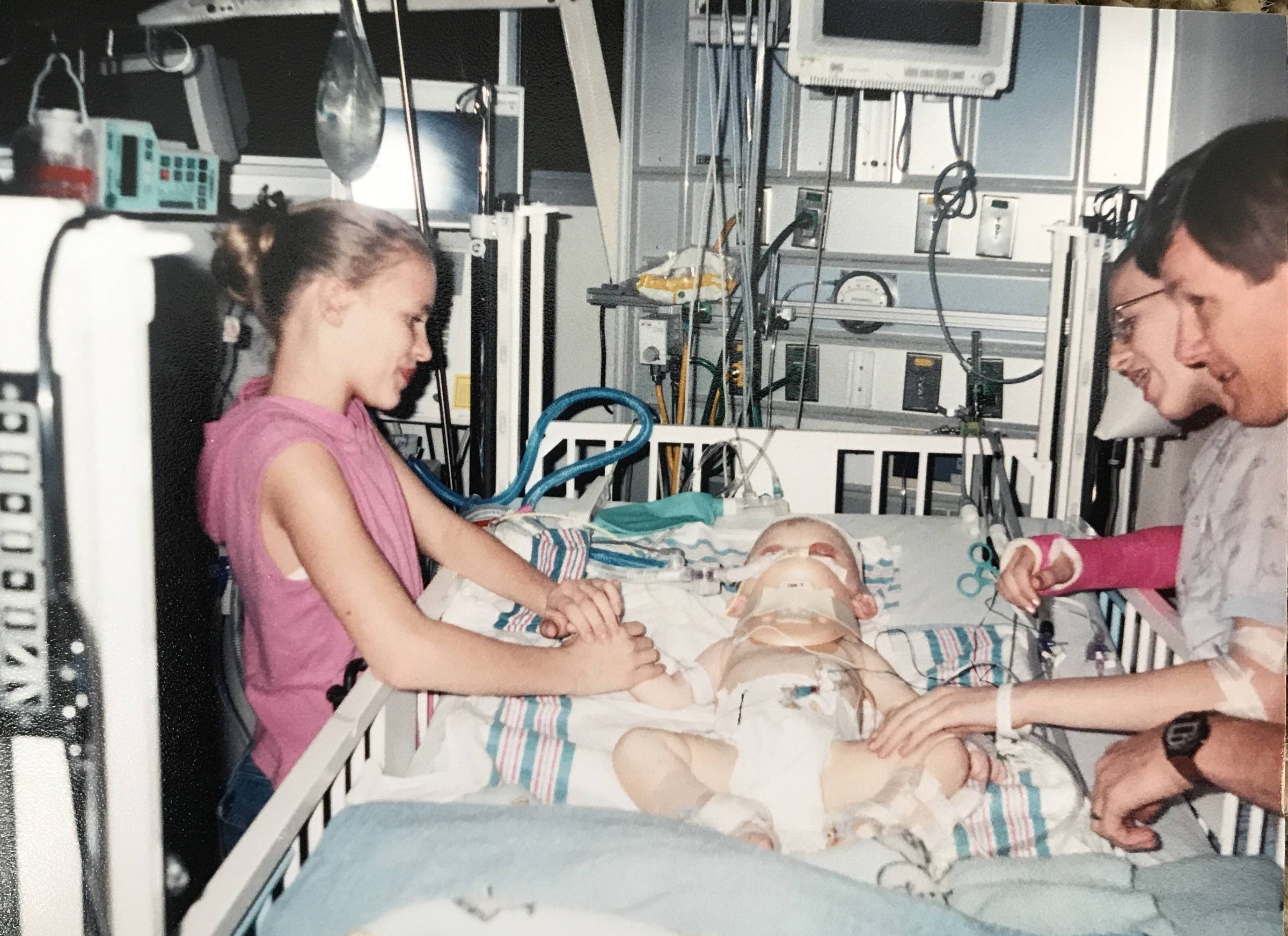 Caleb, who was raised by his Aunt and Uncle, wants to inspire of TBI survivors. If he could, he would tell them all, “keep trying with whatever you’re doing. Keep fighting through, not against, whatever you’ve gone through.” He continued, “you can still accomplish great things.” 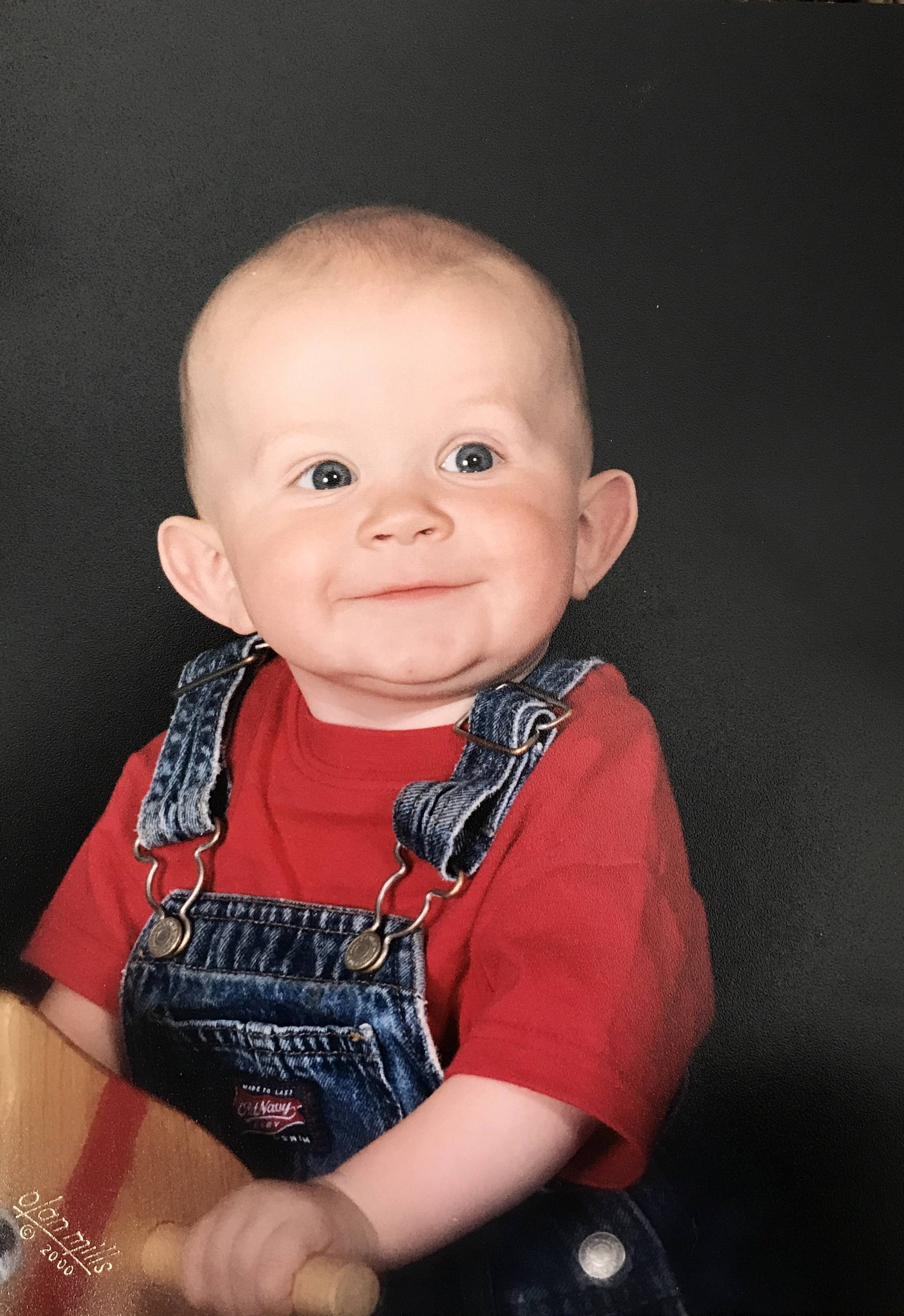 Kirsten remarked on Caleb’s continued recovery and overall strength, “Caleb works really hard, he is always studying and learning more about his injury. We’ll see him make a lot of progress, then we learn more and he makes even more progress.” She continued, “to all TBI survivors, keep learning and always remain dedicated. Don’t give up.”

Caleb is a senior in high school with plans to attend Utah Valley University to study the culinary arts. His favorite dish to cook is parmesan garlic spaghetti! 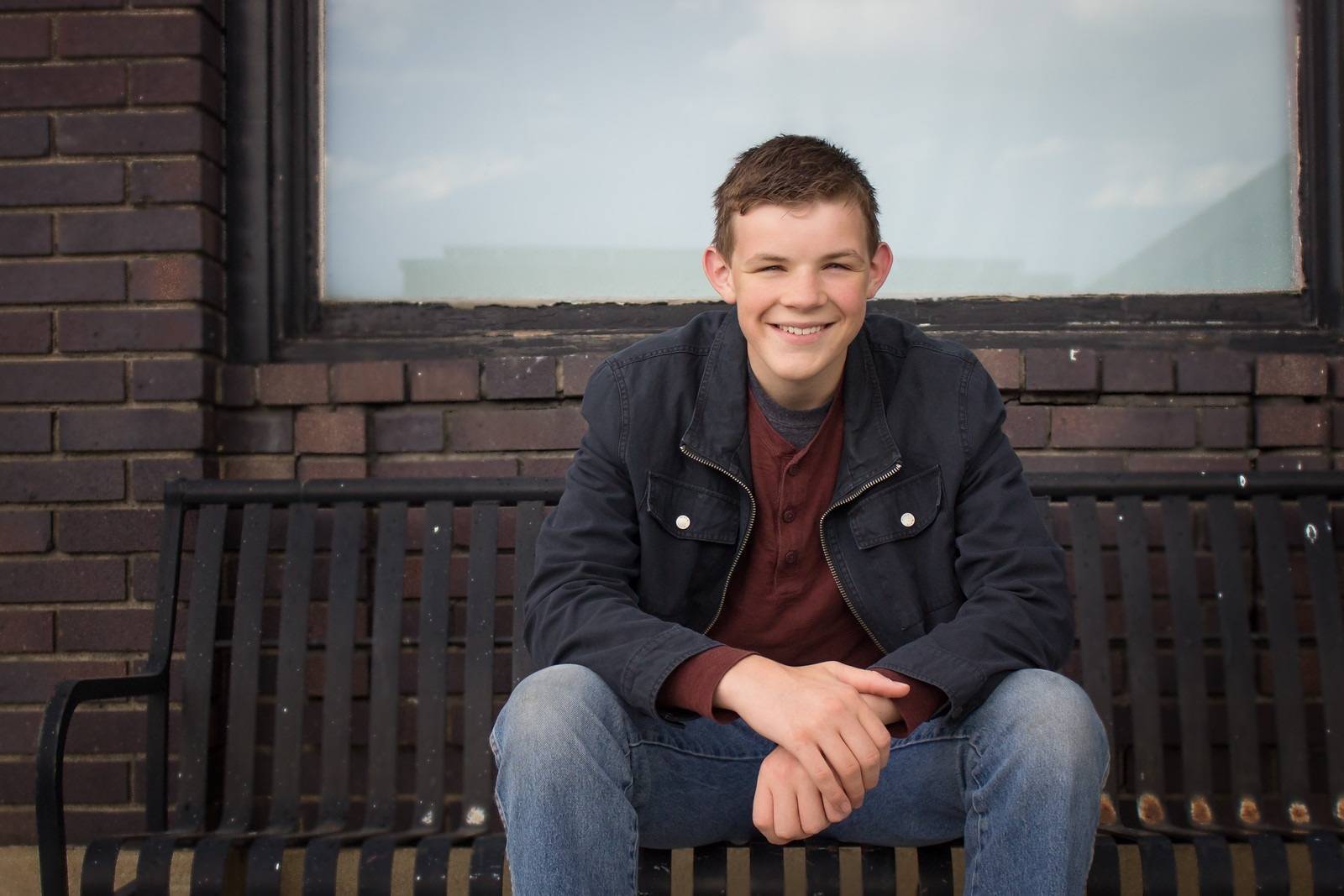 With the support of his family, Caleb created the website, Caleb Electric Brain. He hopes to both spread awareness of TBI through the sale of merchandise and ebooks, written by his sister. All proceeds from the website go to fund Caleb and his education. If you’d like to support Caleb, click here. 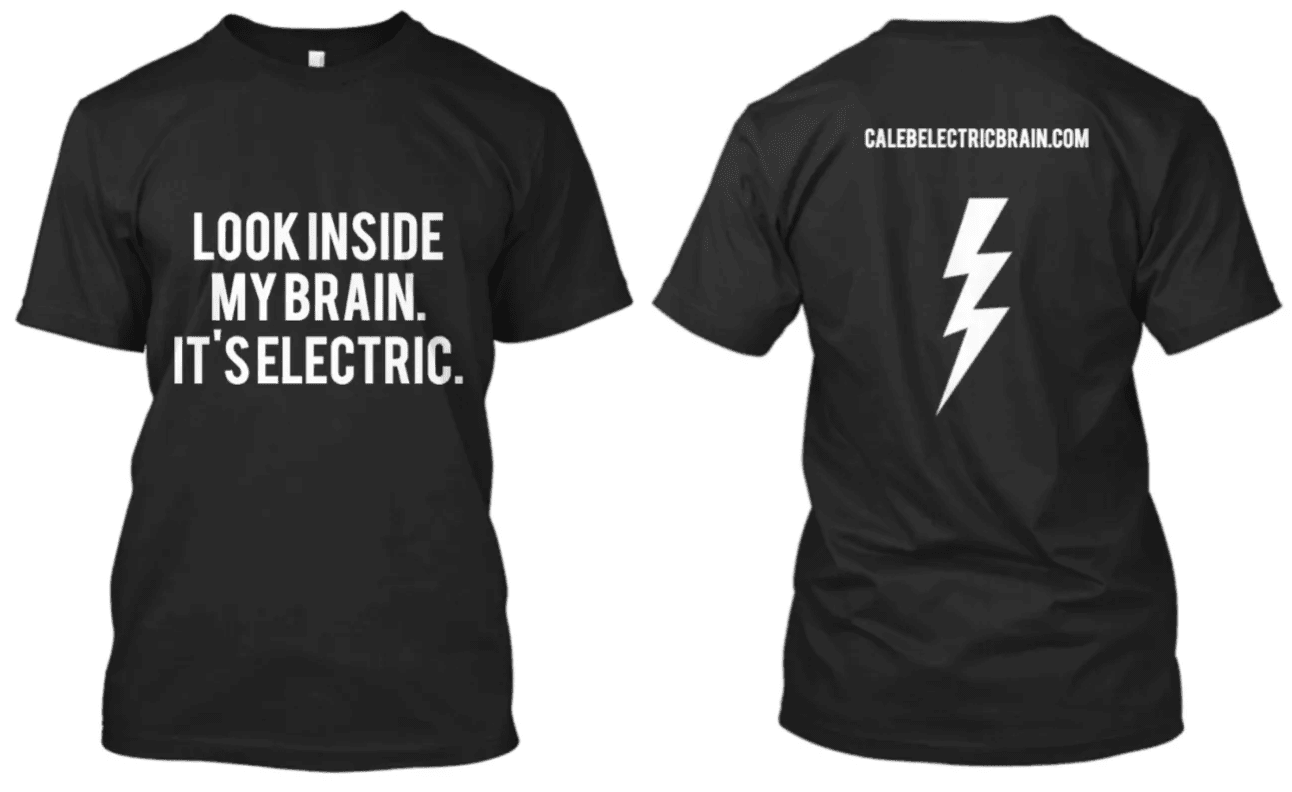 Caleb has learned a lot about the nurse who saved his life in the comments on his viral video. Yesterday, he learned that she passed away from Cancer. 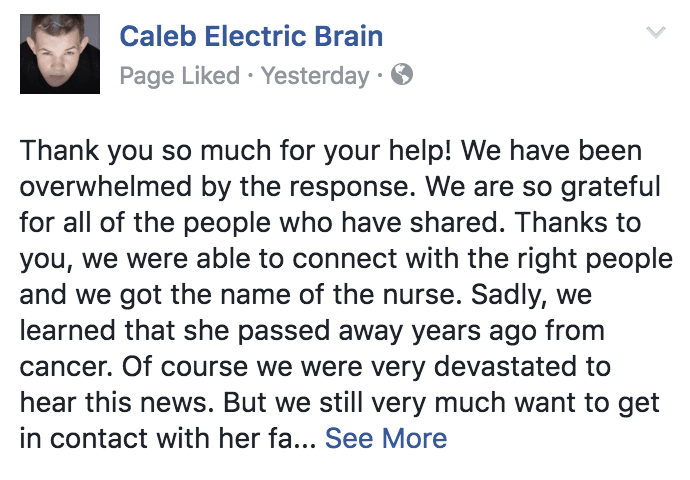 While the news is unfortunate, Caleb and his family have been able to connect with other members of the healthcare team who helped him along the way. Tomorrow, they speak to the staff at Medical City McKiney hospital and plan on making a trip to Texas in the near future to visit the hospital and meet the family. You can help Caleb to visit the hospital staff for Christmas by clicking here. 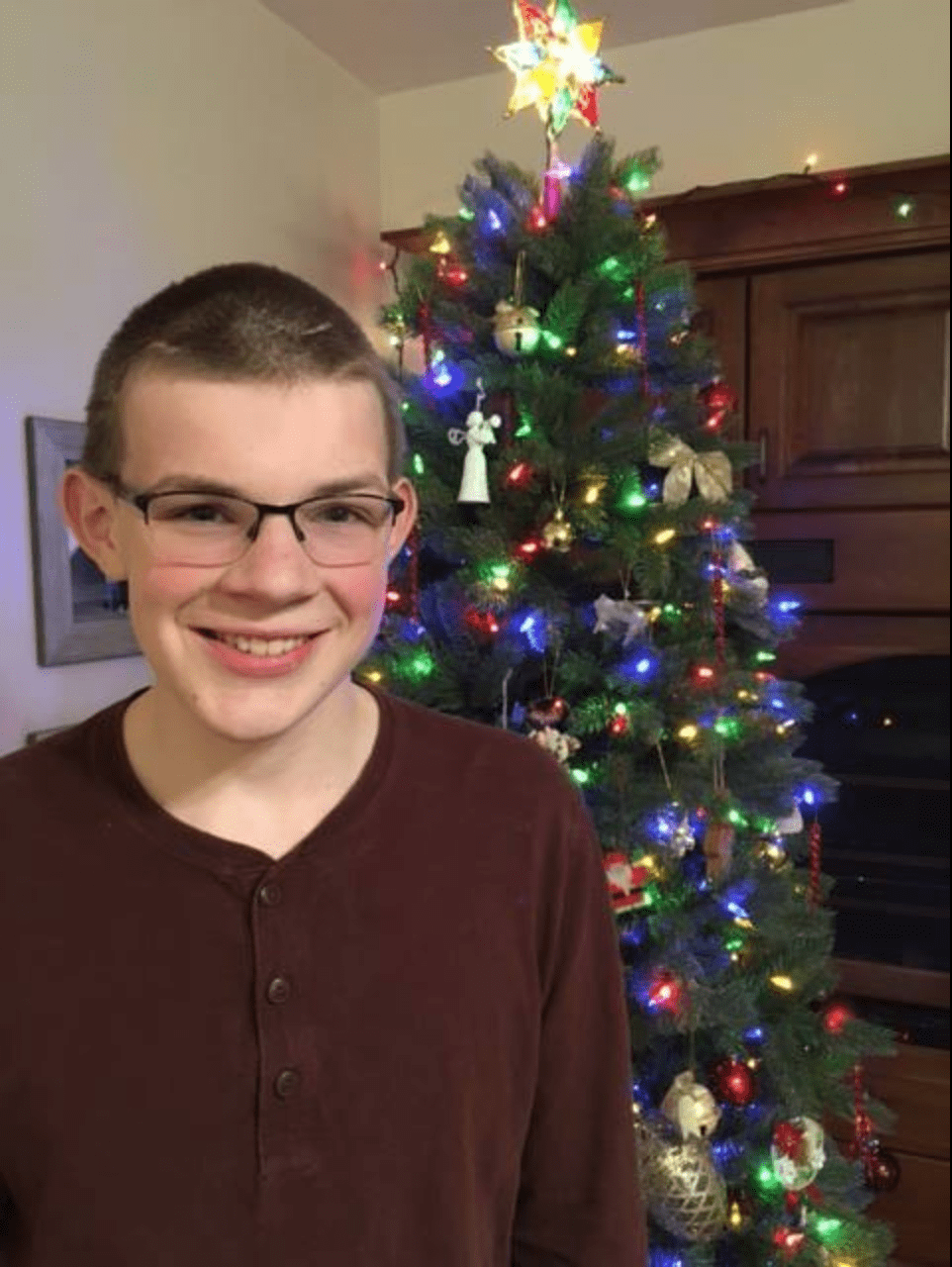 Caleb is thrilled by the exhilarating response to the video and is touched that his story is resonating with other in such a powerful way. The video has been shared more than 5 million times.

Up Next: Mother Delivers Stillborn Baby, She Didn't Expect Nurse To Do This.