Get the latest news for nurses
NEWS
January 2, 2021

Since this article was published last year, Farah Roslan's work has garnered praise from many. Most recently, Malaysia's Health Director-General Noor Hisham Abdullah, took to Facebook to express his appreciation for Roslan's efforts in creating the first disposable hijab for Muslim women. 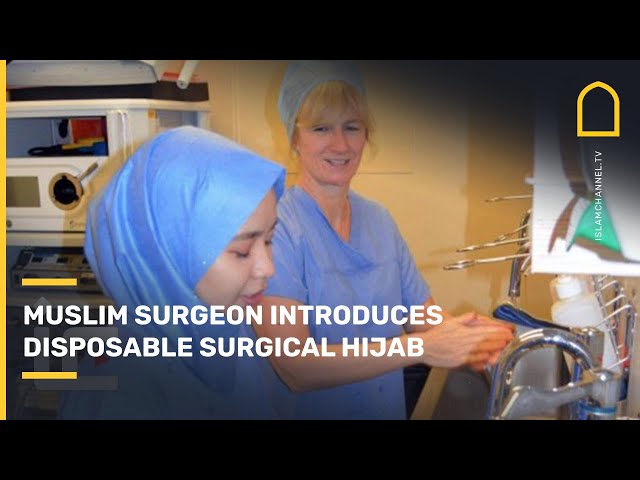 Thanks to the efforts of one medical student, Royal Derby Hospital in the U.K. is the first hospital to offer disposable hijabs for healthcare workers.

The disposable hijab was introduced by junior doctor Farah Roslan, a practicing Muslim, who came up with the idea during her training. She was wearing her traditional headscarf all day, which, she noted, was not particularly clean or “ideal.” Concerned the hijab might be a potential source of infection, she was told that she could not participate in the OR as a medical student.

Although she told BBC News that the decision to pull her from the operating room was done “respectfully,” she still felt like a solution could be reached that would allow her to take part in a way that would also respect her faith.

And so, she got to work. 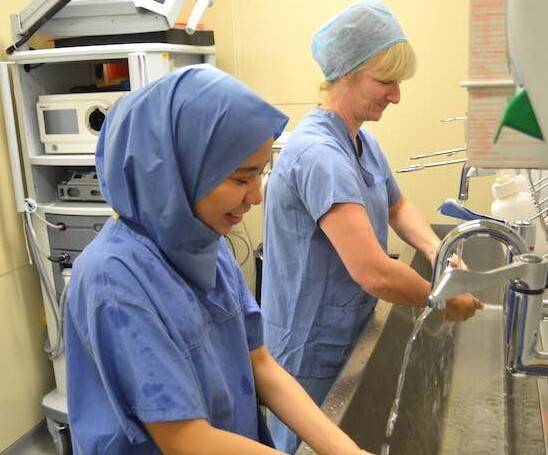 Inspired by her homeplace of Malaysia, Roslan worked with her mentor, surgeon Gill Tierney, to design and introduce a disposable hijab that would be appropriate for infection-controlled settings, such as in the OR or working with patients in medical isolation.

Tierney told BBC News that the issue of nurses and doctors being forced to choose between their beliefs and their work has been an ongoing yet overlooked issue. "We know it's a quiet, silent, issue around theatres around the country and I don't think it has been formally addressed," she told the network.

Roslan and Tierney ultimately worked with University Hospitals of Derby and Burton NHS Trust to unveil their design and the NHS Trust has become the first hospital to offer disposable hijabs for healthcare workers. According to Tierney, the sterile, disposable hijabs have not “cost very much,” but are expected to have an “enormous” effect for the women who will wear them. 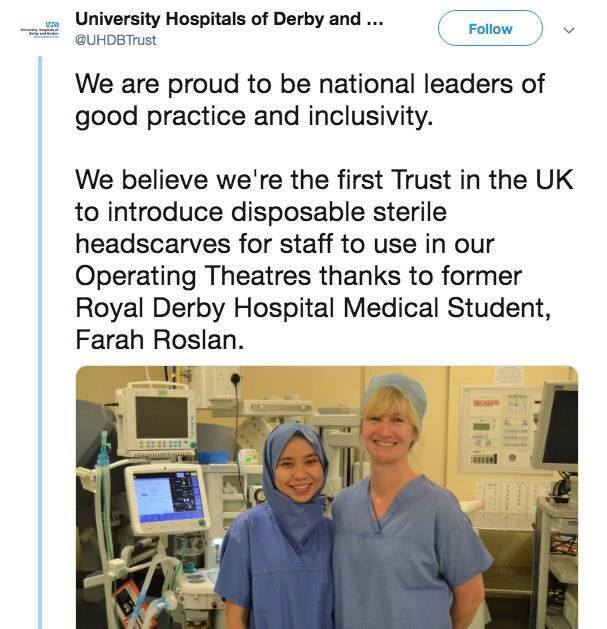 And the effect has already proven to be rather enormous, prompting many to applaud the move for increased representation in healthcare. The hospital tweeted out its news on December 11, writing, “We are proud to be national leaders of good practice and inclusivity. We believe we're the first Trust in the UK to introduce disposable sterile headscarves for staff to use in our Operating Theatres thanks to former Royal Derby Hospital Medical Student, Farah Roslan.”

In response, many celebrated the announcement. “LONG overdue,” wrote one user in response. “ A friend of mine who I was on placement with who wears the hijab was left in tears after theater staff said ‘you can’t wear that in here’ and laughed as they tried to wrap her head in theatre sheets, i felt so so sorry for her. well done Farah” 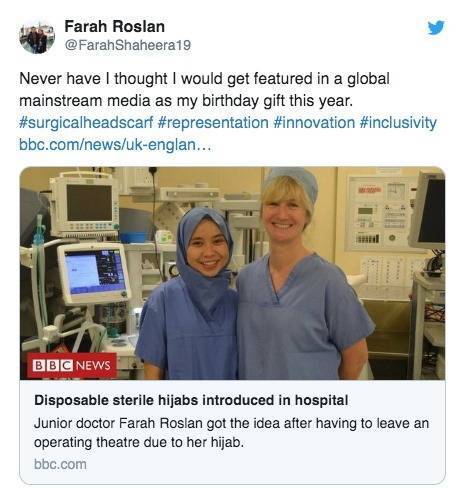 While most on social have celebrated the hospital introducing disposable hijabs, others are cautioning that while it’s a step in the right direction, there’s still more work to be done for full inclusivity. “They need long sleeves too,“ one Twitter user pointed out.

How Nurses in the U.S. Handle Hijabs

In the U.S., there are no official statistics on how many nurses wear hijabs, and we can assume that some may feel the head coverings would not be accepted in their workplaces, worry they may pose a practical issue, or simply not be aware of how to approach the issue at all.

What we do know is that nurses who wear hijabs are limited on access to disposable options they can wear in cases where PPE is needed. Medical wear company Medelita makes medical-grade hijabs specifically for healthcare workers, with features like antimicrobial fabric and a secure fit to ensure it won’t come loose but even their medical-grade solution is not disposable, so it’s still not always appropriate for strict infection-controlled settings. 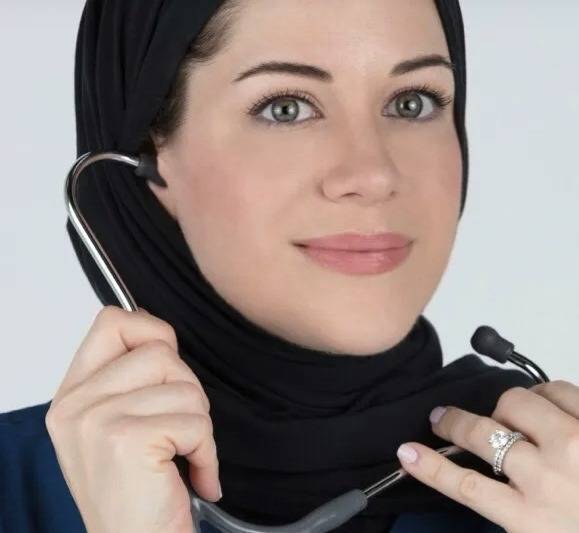 Some nurses, like Malak Kikhia, who profiled her experience as a labor and delivery nurse for Healthline, choose to wear a surgical cap during deliveries instead of a traditional hijab instead. But Kikhia, who did wear a hijab when she began her career, found that wearing the head covering, allowed her to break through the prejudice she initially experienced when caring for patients. For her, being able to physically represent both her Muslim beliefs and her work as a nurse provides a way to educate entire communities who are misinformed about her faith.

“I never hide that I’m a Muslim,” she told Healthline. “In fact, I always bring it up to my patients so they know this funny, normal lady is a Muslim.”

There are also some disposable hijab options available online from Amazon, but of course, as a nurse, then you run into the fact that you’d have to get any head coverings you purchased yourself approved by management and infection control, to ensure it was actually protective enough. And in countries where hijabs are more common, such as Malaysia, sterile hijabs are kept in the OR for healthcare staff that needs them and are cleaned and resterilized between procedures.

The disposable hijabs, the Trust says, have been made available to nurses and doctors this month, and Roslan added that she hopes to introduce the design nationally.

But no matter what the future may hold for Roslan or the future of inclusivity and diversity within healthcare, the young doctor is proud to have made a difference. On her Twitter page, Roslan gave the final word on why she felt it was important to bring her idea to life.

“If you feel like something isn’t right, do something about it - you don’t always have to conform,” she wrote. “Do not change you who are (or what you believe in) while pursuing your goal or ambition.” 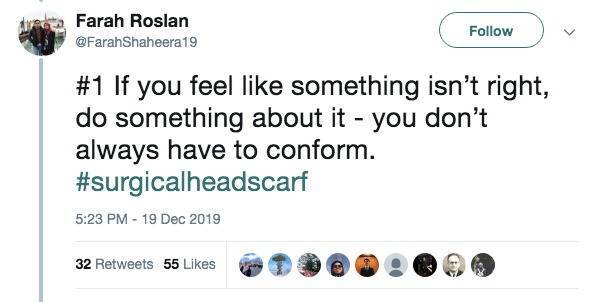 “Representation matters,” she added, along with the hashtag #surgicalheadscarf. “If you can’t find someone to represent you, perhaps you have to be one who does things first.