Get the latest news for nurses
NEWS
September 5, 2018

A hospital system in Indiana is making headlines across the country for a brand-new policy that some people are applauding, while others are appalled by. But just what is this controversial policy that is causing such a stir?

It comes down to tattoos.

The Indiana University Health system, a medical unit that includes 16 hospitals, just announced that it has retracted its former 50-page dress code for a new and streamlined 5-page document. The new policy has done away with the old rulebook that stated that nurses could not have visible tattoos, body piercings, or unnatural hair colors in favor of that is more focused on the care that an employee can provide.

The hospital system, which is actually the largest in the state of Indiana, announced the change earlier this week, allowing employees, for the first time ever, to choose their own sock colors (exciting!), wear sports logos, and have visible tattoos.  The move, according to Michelle Janney, the chief nurse executive of IU Health, was representative of the organization’s overall value of “messaging authenticity.”

“We want you to bring your whole self to work while maintaining a professional image,” she told The Star Press. “We knew that many of our caregivers had tattoos that they were hiding and that just didn’t feel genuine to us. Actually what we’re saying is use good judgment and we trust you.” 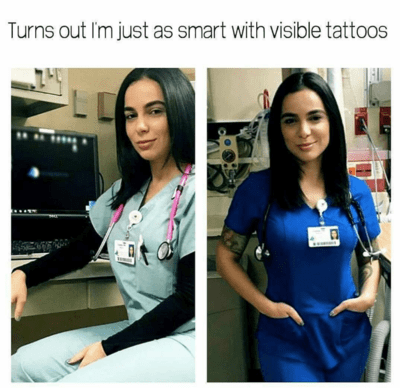 For many years, the profession of nursing has had a long history of emphasizing the importance of appearance. There was a general consensus that things like tattoos, piercings, and dyed hair had no place in a professional healthcare setting where lives were at stake. Companies like Tat2X existed to offer nurses with arm tattoos sleeves they could wear to cover up while on the job, noting that, “tattoos and nursing don't always go well together.”

Many of us can recall the traditional white dresses, white caps, and stockings nurses were required to wear, all in the name of preventing a “professional” appearance that a nurse, always a woman in the past, would present. But now, thankfully, we have all evolved a bit to realize that 1) no one should be controlling what women look like in any way, shape, or form 2) nursing is a profession for all genders and 3) professional care is not dictated by appearance.

While the move may represent a change towards more inclusivity on the part of the state’s health system, it also may be a financially-motivated one. With the Bureau of Labor Statistics predicting that 1.09 million replacement nurses will be needed by 2024, a movement towards making the career one that welcomes all types may just help boost the number of nursing enrolling in the profession as well. Other prominent healthcare systems, such as the Mayo Clinic, have been relaxing their rigid rules on professional appearance in hopes of attracting more people to the field of nursing as well as acknowledging a new generation with different values and beliefs. For example, Mayo Clinic’s Career Awareness Guide for high school students advises prospective students to realize that employers have the right to determine what is “appropriate dress and decorum,” while still acknowledging that visible tattoos that do not contain violence or inappropriate content are allowed. 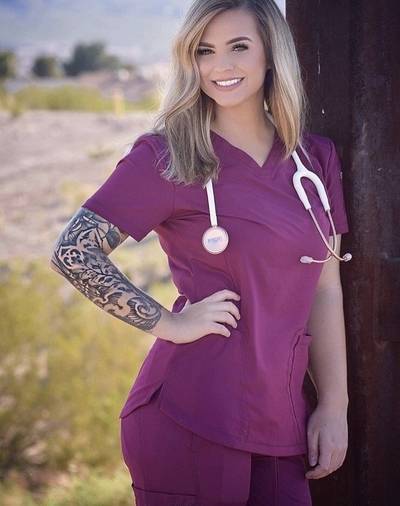 Regardless if there is one sole motivation for the move, inked-up nurses everywhere are celebrating the change and more importantly, highlighting the true intent of the policy change, which is to bring attention back to the patient-centered care, not what the person delivering that care looks like. Nurses within the IU Health system celebrated by doing things like sporting pink hair for breast cancer awareness, finally moving to their dream departments like OR, where they could openly scrub in and have their tattoos show, and sharing their stories on social media in hopes of proving once and for all, that tattoos and nursing can go together.

“It turns out I’m just as smart with visible tattoos,” she captioned the photo.

What do you think? Should nurses be allowed to show their tattoos?

Next Up: Advance Your Career Through Networking And Social Media