Nurse Alice is Running for VP of the American Nurses Association

“I am at a point in my career where I have the knowledge, experience, network and time to effectively provide meaningful contributions, drive change and speak up for nurses who either aren't or able to be as involved as they would like,” Nurse Alice tells Nurse.org of her decision to run.

She adds: “My diverse, front line and well-rounded experience has empowered me to speak up and make a change. Many times we as nurses will talk and complain about issues and problems but there isn't action or it's not timely and we find ourselves/profession idle. I'm ready to change that. I think nurses should be leading several of the national conversations that have been occurring and that we've only been a spectator of.” 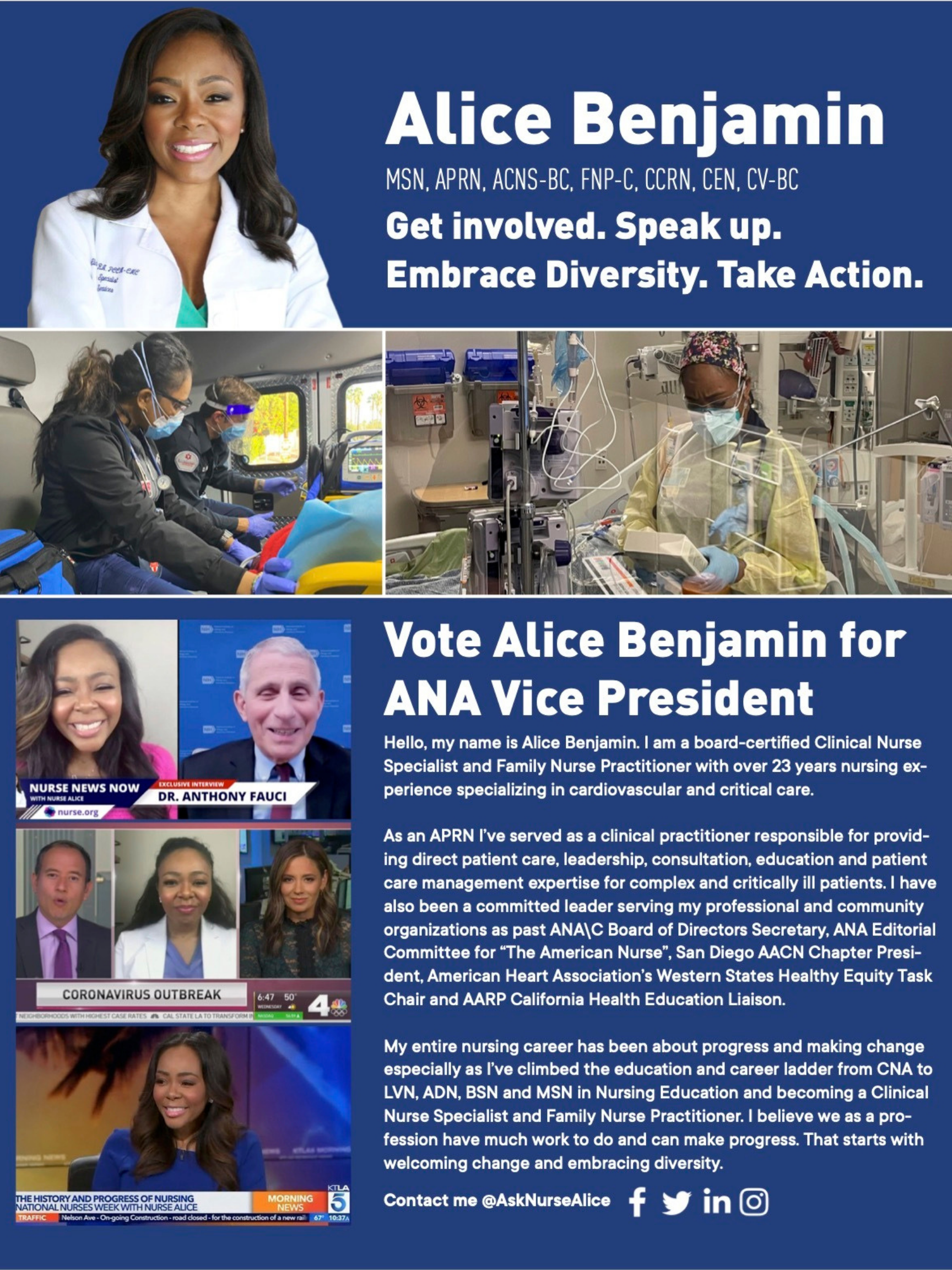 A Lifetime of Service

Nurse Alice has dedicated her career to serving others as a nurse, as well as empowering and equipping other nurses in the industry with the knowledge they need to do their jobs well and be a larger part of advancing the field of nursing.

She knows, acutely, that every shift clocked, every warm blanket fetched, and every minute spent studying when you’re off the clock matters–and she’s never lost her down-to-earth approach as a nurse, even when she’s interviewing leaders like Dr. Fauci or appearing on shows like CNN, NBC, and Dr. Oz. “My education, career, and real-life experience has always been one of change and overcoming challenges while exercising resilience, compassion, and grace,” she says.

Long Time Member of The ANA

She’s also been a long-time member of the ANA and notes that she has benefited, both personally and professionally, from the organization. She’s been a part of the ANA for well over 12 years, starting off as a member and becoming progressively more involved with things like starting on committees, being a speaker for various ANA events, speaking out in the national media about issues important to nurses such as workplace violence, and then running for ANA\C Board of Directors in California. Outside of her direct roles, she also adds that the ANA has provided a great source of information and tools that she’s been able to use to grow in my career.

Despite all the good that the ANA has done for the nursing field and in her own career, Nurse Alice explains that she’s ready to roll up her scrub sleeves and do even more.

“While I appreciate the work that ANA has already done, I believe there is still a lot of work that needs to be done to unify our profession, strengthen our voice and make an impact,” she says. “And to effectively do that work we need diversity in age, gender, identity, culture, race, skillset and thought processes embracing different ways to do things. The truth is, we can't keep doing the same thing and expect different outcomes. ”

What are the VP’s duties and responsibilities?

So what would Nurse Alice’s future as the Vice President of the ANA look like?

If elected, Nurse Alice will be doing what she does best–serving to communicate publicly the organization’s mission–as well as performing special functions of the office, including strategic planning for the organization and its members, representing the membership at large, serving on board committees and task forces, working with the budget, and assuming the duties of the President when needed. The VP is also closely involved with organizations that ANA works with, including the American Academy of Nursing (Academy), American Nurses Credentialing Center (ANCC), and the Foundation.

The term of the ANA VP is a two-year one and the person in the role can be re-elected for up to two terms.

How to Vote for Nurse Alice

To support Nurse Alice in her quest to become the VP of the ANA,  you can take the following next steps,

No matter the outcome of this election, one thing is for certain: Nurse Alice is a nurse who knows how to get the job done–and she will be a powerful force wherever she lands in the future.

“I'm ready and prepared to do the heavy lifting that the ANA needs to embrace our new nurses, new technology, and new challenges while balancing that with respecting tradition and the work that's already been done,” she says.

Listen to the Ask Nurse Alice podcast now on Apple Podcasts, Spotify, or wherever you listen!