According to reports the New York Daily News, nurse Faith Linthicum has been fired by Kaiser Permanente. She has set-up a GoFundMe account that has since raised over $23K.

"I’m a United States Military veteran who served as a medic, and then fulfilled my dream taking care of people by becoming a nurse.  I was recently fired from my job as a nurse at Kaiser Permanente for exercising my First Amendment right to free speech.  I am a proud supporter of this great Country, the First Amendment, the rule of law, and law enforcement.

Recently, I have been in the news due to a misconception from an activist group here in Sacramento. I assure you, and for those that know me, I am not a hateful or discriminatory person.  As a person of faith, and a nurse, I love all people and treat everyone equally.  Kaiser Permanente fired me without any investigation, and without giving me an opportunity to explain or defend myself.  I believe Kaiser Permanente violated my First Amendment right to free speech in order to protect themselves from the wrath of these activists.  I am now unemployed and unable to pay rent, buy food for myself and my two dogs (French Bulldog & Great Dane), or make my car payments/insurance.  I am asking for support during this trying time as I try to find employment and heal."

Sacramento Nurse Faith Linthicum has reportedly been placed on administrative leave by Kaiser Permanente after allegedly saying Stephon Clark, 22, deserved to be killed “for being stupid.” Clark died in his grandmother’s backyard after being shot by the Sacramento police and an autopsy revealed he was shot in the back 8 times - he was unarmed. 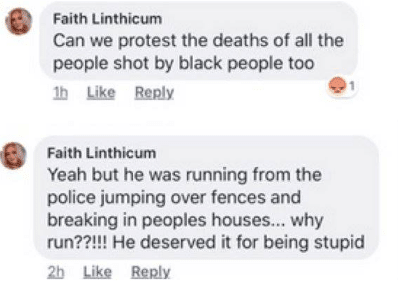 The Sacramento Bee reported that Kaiser had placed Linthicum on administrative leave during the investigation, they did not disclose if she had been terminated. The hospital released the following statement:

"Kaiser Permanente does not tolerate hate or discrimination and has a long history of embracing diversity and inclusion – it remains a place where we welcome everyone. We want to emphasize that the comments expressed by this employee, who is no longer with the organization, do not in any way reflect Kaiser Permanente’s views or actions."

“I gave birth at Kaiser in Sacramento, it was a horrifying experience plagued with racist nurses and doctors. Kaiser Roseville Women And Children's must do something about these racists once they out themselves. How can we trust our lives, the lives of our black and brown babies to these people?"

The screenshots have been shared over 2,000 times and have gained attention from international major news media.

NEXT UP: Must Read Social-Media Advice For Nurses