Where some people might see medical waste, Beth Beaty, 37, an RN in Charleston, SC, sees art.

Beaty took a look at a pile of discarded medication caps from her work at Roper Hospital and decided to transform them into something beyond just garbage. The nurse, who has a background in both graphic design and photography, painstakingly hand-crafted a beautiful mosaic of her town only using old medication caps and supplies—and her artwork now hangs in the hallway of the hospital for everyone to enjoy. Here’s how she transformed medical caps into art, how her background in design helped her and how her creative journey spurred from her own brush with cancer.

The RN tells Nurse.org that the mosaic — made from caps she has been collecting in the five years she has been a nurse — is a perfect blend of both of her creativity and love of healthcare.

“I think I was born to be an artist, and also born to be a nurse!” she says. Beaty explains that she grew up in the country without cable TV, so she was always looking for art projects to keep her busy. Thanks to the influence of her grandmother, also a nurse, she attended art classes from a young age as well, learning to draw, paint, sew, play the flute and practice calligraphy.

“I love to decorate and make things,” she says. “I think I've now just taken what I've learned in school and combined it with my natural abilities to make whatever I want. It's so fun and therapeutic the med cap paintings are the perfect combo for my art and nurse world!”

For Beaty, her creative work comes with a deeper meaning as well — although she enjoys creating art for patients and their families to enjoy, it also helped her through a difficult time. She first began experimenting with turning supplies into art when she was diagnosed with breast cancer and off of work. She explains she started to miss her coworkers and other staff members and decided to make Christmas ornaments for them. 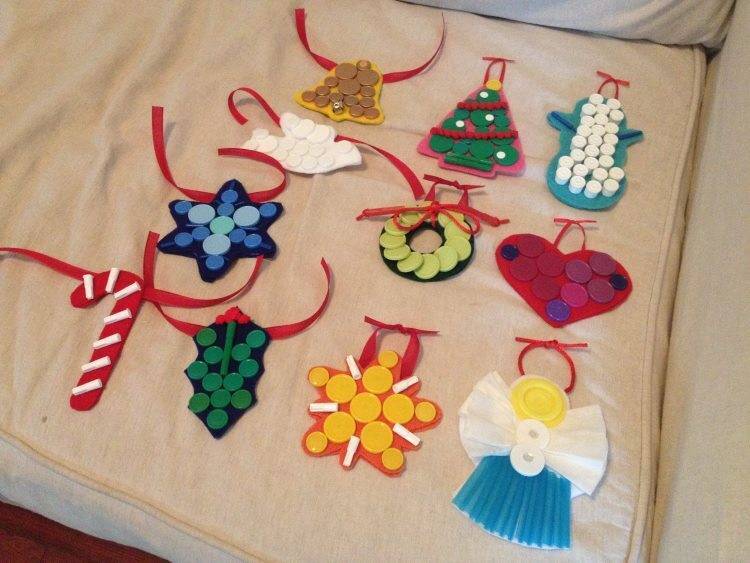 “I think it was just my way of showing them my love,” she explains.

In her capable hands, candy canes, wreaths, angels and stars made out of felt and med caps took shape. At the suggestion of another nurse, she made angel wings from coffee filters. After seeing how well the ornaments turned out and were so well-received, Beaty took things one step further. 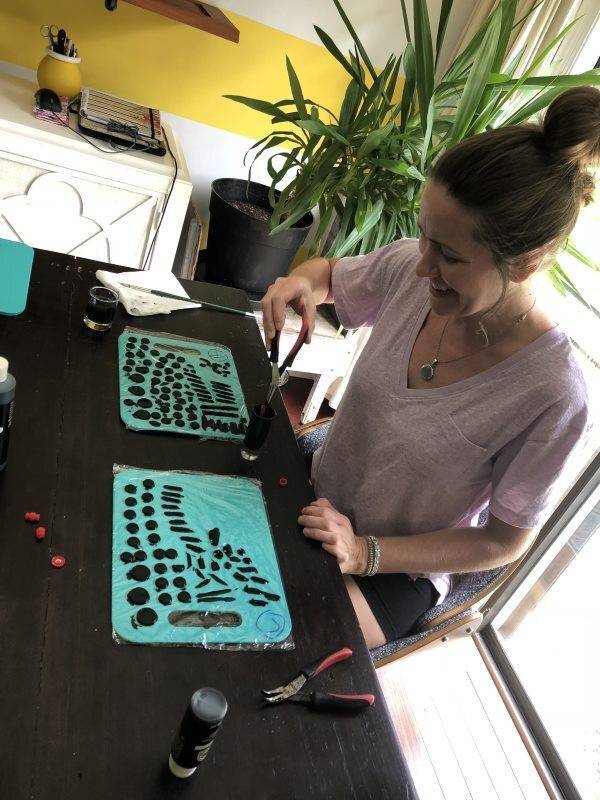 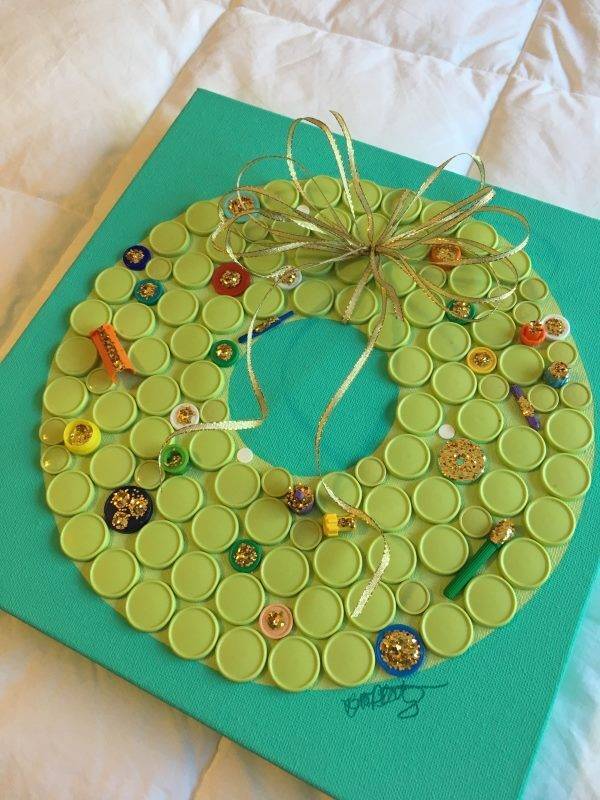 “From those, I upgraded to a small canvas and when again that turned out well, I went BIG!” she explains. “I generally do prefer the scale of larger pieces of art. I think sometimes people are scared of that, but not me. They make for a much bigger statement than a bunch of smaller hodgepodge pieces, and our hospital walls can certainly handle it.”

For her big artwork, Beaty decided to create a mosaic of Rainbow Row, a group of historical riverfront houses on East Bay Street in Charleston. Once drab, the houses were painted in bright colors after the Civil War, an effort that’s said to have been a way to differentiate between merchants and help sailors find their way back home. Although their colors and numbers have changed throughout the years, Beaty stuck to the originals for her painting.

“While creating this artwork, my appreciation for Rainbow Row grew a ton,” she adds. “The architecture of these houses alone is amazing, and it was very fun to study and recreate them as best as I could with the recycled medical supplies.” 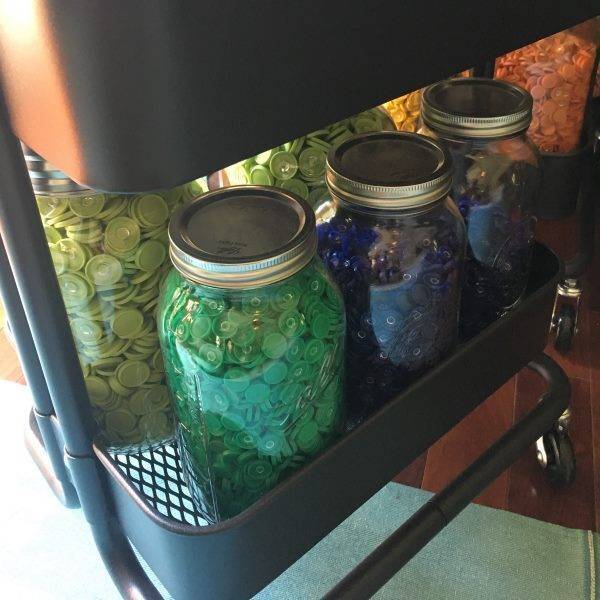 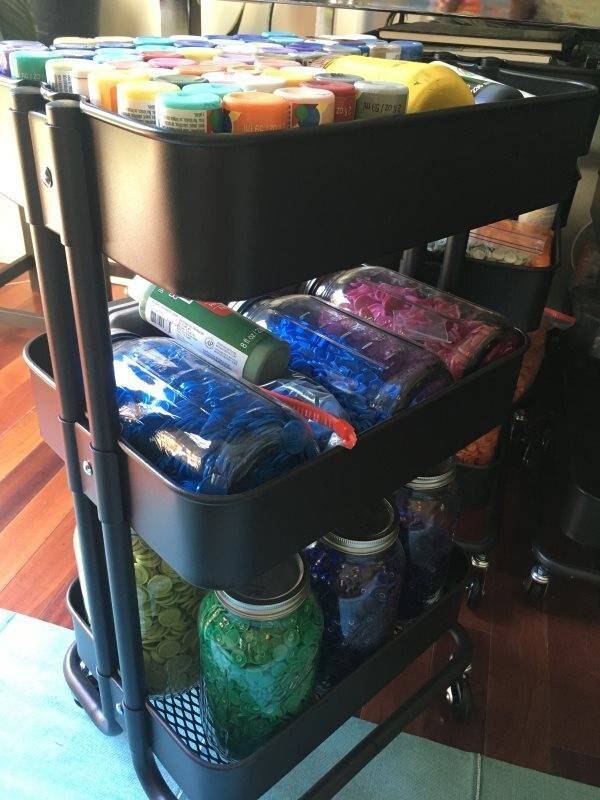 To actually craft her art, Beaty relies on help from her fellow nurses and coworkers, who will often save supplies for her rather than toss them out, especially if she is short on a certain color. For instance, one nurse was going to throw out an old stethoscope when Beaty intervened — and that same stethoscope is now a proud part of a horse on the Rainbow Row painting.

Beaty admits that her painting did take a significant amount of planning and work, from collecting, washing, drying, sorting and storing all the caps, to photographing the houses for accuracy, to actually painting and gluing the caps on her canvas. All in all, completing the painting took a total of one year.

“I didn't want to rush it, which is why you see so many details,” she says. “Studies show that people prefer landscapes over all other subject matter. I really like this one because it takes you to another place really, and you can relax for a moment. Maybe you feel like you're the one walking down Rainbow Row or riding in the carriage.”

Once it was finished, Beaty’s father and brother were able to create a custom frame for the piece through their woodworking company, Beaty Brothers, and the beautiful painting found its home in her unit’s front hallway between two patient rooms and across from the med room.

“A lot of traffic goes through there, yet it has its quiet moments,” she says. Beaty also decided to dedicate the painting to the memory of late Dr. Julia Haile, who she says inspired her with a positive attitude and interest in her work.

The painting, now complete, is the first piece of artwork that Beaty has publicly displayed and it has been received with a lot of excitement from staff, patients and families. It’s even been featured on the news. 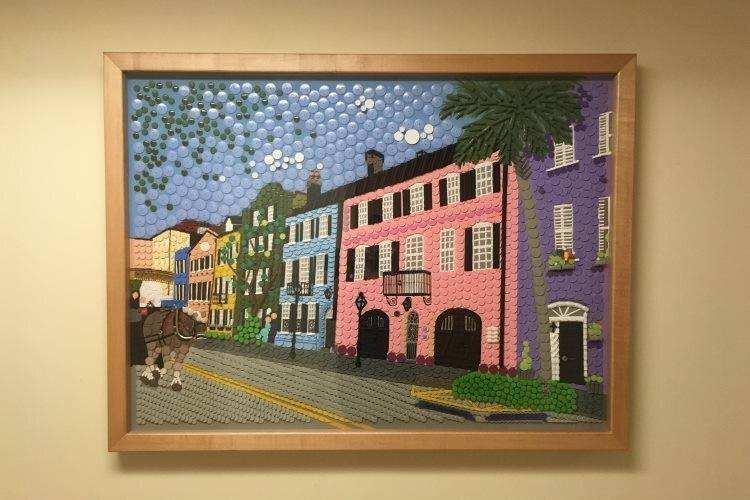 Beaty says it’s been wonderful to see others enjoy her art and after seeing the positive reaction to her piece, notes she plans to continue her med cap paintings and hopes to work on a sailboat project next, drawing inspiration from the photo opportunities around in the Charleston area.

And although she enjoys the artistic process and finds creating therapeutic for herself, Beaty really hopes that her work impacts the patients in the hospital the most, even if it’s just to provide a brief spot of brightness in their day.

“I really hope it will inspire everyone to keep working hard and to be brave,” she says. “The patients are going through a lot. Hopefully, it takes their mind somewhere else peaceful for a moment. You should see their face light up when they see what I've created with those caps, especially after having to stick them with insulin needles all day.”