Get the latest news for nurses
NEWS
August 2, 2019

According to a lawsuit filed with the Texas Court of Appeals in April 2019 seven APRNs–who worked at a privately owned OB practice, in Longview, Texas– were handed letters of termination by the owner, Dr. Yasser Zeid. They were asked to sign a new contract if they wished to continue working for him. 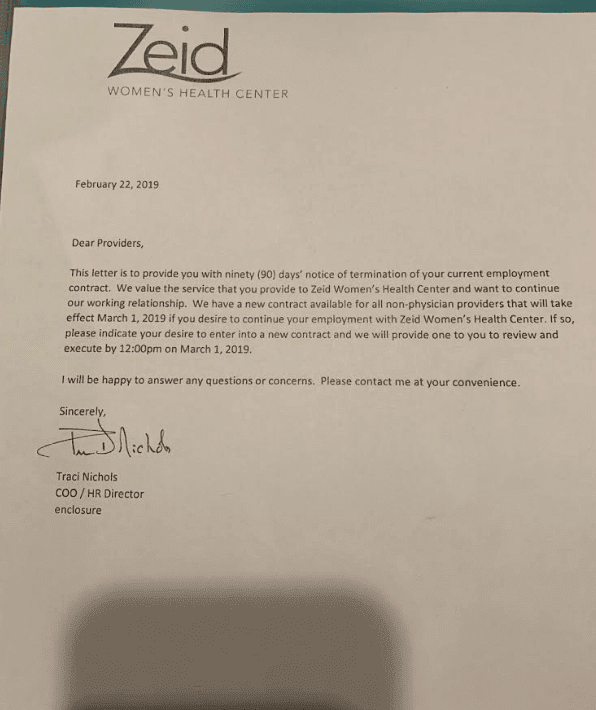 The nurses decided not to sign the new contract and reported the following reasons,

The two parties are now engaged in a lawsuit. The seven women–three certified nurse-midwives and four nurse practitioners – were able to initially find work in their community, however, due to the non-compete clause in their original contracts with Dr. Zeid they were fired. Now, all 7 nurses are having a difficult time finding work.

Temporarily Banned From Working In Their Community

According to the lawsuit the nurses took their skills and experience to a federally qualified health center (FQHC), Special Health Resources for Texas (SHRT).

Although the original contract, with Dr. Zeid, included a non-compete clause, the women believed they were free to work anywhere in their community based on two facts.

The non-compete clause is provided within the brief and states the following,

At the expiration of the term of Employee’s employment hereunder, or

Employee’s employment without cause, then Employee will not engage

either directly or indirectly, actively or silently, under contract or

otherwise, whether or not for compensation, as an employee, owner,

otherwise, in conjunction with others nor in Employee’s own account

of such termination of this Agreement, as the case may be, (ii) at Family

Clinic or any of their successors or assigns; within a twenty (20) mile

The seven began working for SHRT, which was not one of the clinics listed in the non-compete, in February and on March 27, 2019, Dr. Zeid filed a civil lawsuit against the women and SHRT, in excess of $1 million.

The non-compete clause included four clinics in which they were forbidden to work for 1 year after leaving employment at Dr. Zeid’s clinic. The four clinics include,

Additionally, Dr. Zeid filed a temporary restraining order against the seven women, requesting that they all be prevented from providing women’s health services, in their community, until the case goes to trial in May 2020.

On May 15, 2019, 124th District Judge Alfonso Charles, enforced the injunction– meaning the providers can no longer provide care, in their community. The decision was based on the non-complete clause within the nurse’s contract.

The nurses report that they were fired on June 8th from SHRT, the CEO David Hayes told Longview News-Journal, “They were not going to be able to see patients going forward. So, I did not have any other recourse. We have been supporting them and trying to. We have been in several hearings and trying to support the ladies, but there was no other avenue.”

Tamara Little states, “We were not offered jobs elsewhere. We requested to go work for SHRT in another town, or in another capacity but were not given that opportunity. SHRT has an HIV clinic here in Longview, and we offered to go help out there, but they chose to terminate us instead.” 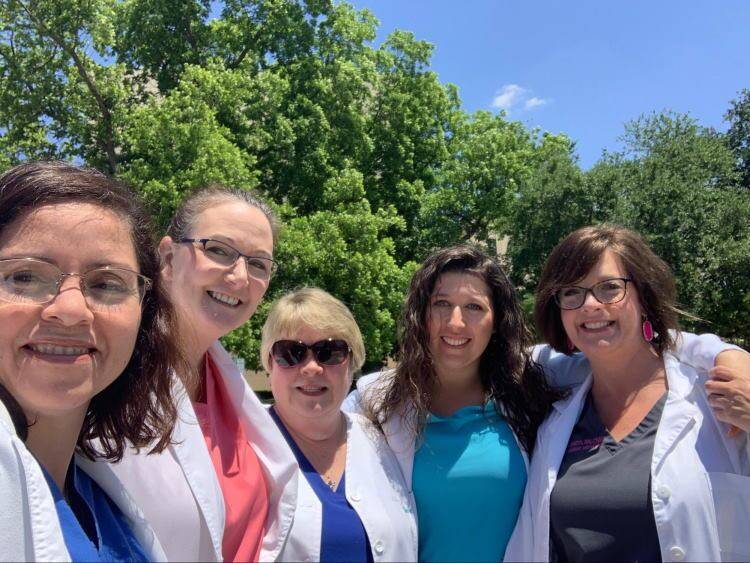 The injunction affects over 900 patients, Zeid’s attorney told the Longview-News Journal that the women solicited a significant amount of patients and some patients did leave Dr. Zeid’s care because of it. According to the lawsuit the nurses were barred from working with Dr. Zeid’s patients for two years after leaving the practice.

According to the lawsuit, Dr. Zied is also suing the nurse’s former employer SHRT for “practice poaching.” The lawsuit against SHRT is also based on the non-complete clause. Within the contract, it was stated that for 1 year after leaving Dr. Zeid’s practice, the employees were not permitted to provide women’s health services at these four clinics,

The non-compete that was signed by the providers was set for 2 years and barred them from soliciting patients in which they provided care for while working for Dr. Zeid.

Kelsey Lyles, a former patient of Sheli Kipp states, “I saw Sheli my entire pregnancy. Never once did I see Dr. Zeid. When all of this started, I was given the option to stay with Sheli or go with Dr. Zeid. I chose to stay with Sheli. She did not poach. I chose her, and now that choice has been ripped from me. The lawsuit forced me to have to call the on-call doctor to deliver my baby. I have very bad trust issues, and finding providers is difficult for me.”

Jazmyne King, a former patient of Linda Boggs, states, “This ordeal that’s happening with the women has affected many of us. Mrs. Boggs was my provider and will still be! Wherever she goes, I will go. She has been with me through all three of my pregnancies.  I hate this is happening, to these ladies. They all deserve to practice again.”

Lunetta Crow states, “I was a patient of Tammie Little. I am an older woman who is trying to conceive, and Tammie has been my rock. I felt an immediate connection and have been at ease with her. When I first met her, my husband and I were trying to conceive, unfortunately, I lost that baby. Tammie encouraged us to try again. We lost that baby, as well. Tammie got me through it. She cares for her patients. She loves them. Unfortunately, the patients have been held hostage, and these women are locked away without a way to provide for their families. It saddens me that Tammie must now move to Alaska and that I will have to rip the band-aids off in efforts to explain my previous miscarriages to a new provider. It’s emotionally grueling.”

Susan Ross states, “Mary Beth Smith has been my midwife since 2016. She helped me through two previous pregnancies. She is compassionate, loving, and always put mine and my children’s well being first. One Monday morning, I received a text saying I could no longer see her. I was heartbroken and stressed. She could not even set up an appointment for me to see if my cervix was short and a cerclage needed placing. Not only did I lose the one person I trusted to get me through my pregnancy, but I lost my right as a woman to choose my provider.  To me, this is unconstitutional and completely wrong.”

Many of their former patients are very outspoken about the rage they feel. The patients feel they have not been given a choice to choose their providers. Missa Ross, a former employee of Zeid and former co-worker of the seven, makes note that the women’s patients are very loyal to them. She goes on to say, “I met a lot of patients that had been seeing Rikki, Sheli, and Estela who all said the same thing about them– they had been seeing them for years and would follow them wherever they went.”

How To Support The ‘Magnificent 7’

The trial is set for May 2020 and the nurses report the following changes to their circumstsances:

The Magnificent Seven have started an online petition in support of their cause.

Portia Wofford is a nurse, content strategist, healthcare writer, entrepreneur, and nano-influencer. Chosen as a brand ambassador or collaborative partner for various organizations, Wofford strives to empower nurses by offering nurses resources for development–while helping healthcare organizations and entrepreneurs create engaging content. Follow her on Instagram and Twitter for her latest.