This Video Will Make You Cry: TODAY Show Surprises Nurse Who Sang For Dying Patient

The TODAY show surprised nurse Olivia Neufelder today as part of their new 'Thank a Nurse TODAY' series. A video of Neufelder singing to her dying patient went viral in October, 2017.

Neufelder shared photos of this special day on Instagram.

As a nurse, you know that every day you’ll touch a life or a life will touch yours. Nurses often go above and beyond to comfort their patients during the most uncomfortable times. Not every moment is caught on video. One such moment between Nurse Olivia Neufelder and cancer patient Margaret Smith was recorded - it has touched the lives of millions.

Nurse Olivia is shown singing “Dancing in the Sky” by Dani and Lizzie to Smith - it was Smith's favorite song. Words cannot express how much love, trust, and compassion is expressed in the short clip.

Neufelder had sang Smith’s favorite song to her every day that she’d been admitted to Vanderbilt Medical Center where she was awaiting a liver transplant.  This particular day was different - moments before the video was captured, Smith had been told that she would not receive a liver transplant - she wasn’t healthy enough.

Smith’s longtime friend Crystal Roberts captured the emotion-filled moment as Neufelder compassionately comforted Smith while her anesthesia waned. Neufelder is seen in the video gently rubbing Smith’s hand and reminding her to smile. The look in Smith’s eyes is one of peace as she lovingly gazes into Neufelder’s eyes as Neufelder proclaims, "OK! it's our favorite part!" - Smith then joins her in heartfelt song.

I hope you’re dancing in the sky

And I hope you’re singing in the angel’s choir

And I hope the angels know what they have

"She didn't feel like a patient at that time. I wanted her to know that she was loved even if her family wasn't able to be there," Neufelder told Channel 5 in an interview.

Smith’s daughter, Megan, says that to Smith, Neufelder was an “angel” - she posted the video to Facebook with the following caption:

“You never left her side by choice! Words cannot describe the appreciation and love we feel for nurse Olivia who mom calls her angel! Your dedication to your patients is beyond any that I have seen, you truly are a beam of light and I cannot thank you enough for the compassion and care and love you shared for my mother. God bless you, Olivia!”

“You don’t have to be a nurse to show compassion,” remarked Nurse Neufeld in an interview with WTVF in Nashville, TN. While the loss of Margaret breaks her heart, Neufelder hopes to inspire others to show more compassion towards others.

Every nurse has one patient that touches their life forever, for Neufelder, Smith is one of those patients, “this experience has challenged me in so many ways,” she remarked.

She continued, “knowing that she will be dancing in the heavens and singing with the angels helps me find peace during this somber time.”

"There was almost a sense of peace knowing that it was her favorite song and she did tell me it's the song she wants played at her funeral," Neufelder told NewsChannel 5.

Neufelder took to Facebook to express her feelings, “Miss Marg has touched my heart in such an indescribable way. I am so humbled and honored to be a Nurse. My thoughts and prayers are forever with this amazing family.”

Smith was moved to a nursing home where she died 6 days later, Neufelder was able to speak with her one last time, “I told her, ‘You’re going to be my angel now.”

A GoFundMe page, set up in Smith’s honor states that she passed away earlier this week - it describes Smith as, “a mom to a lot of our children, a prayer warrior for those who needed prayer, an ear for all of us in time of venting and just being the most perfect friend.”

Not all angels have wings, some wear scrubs. 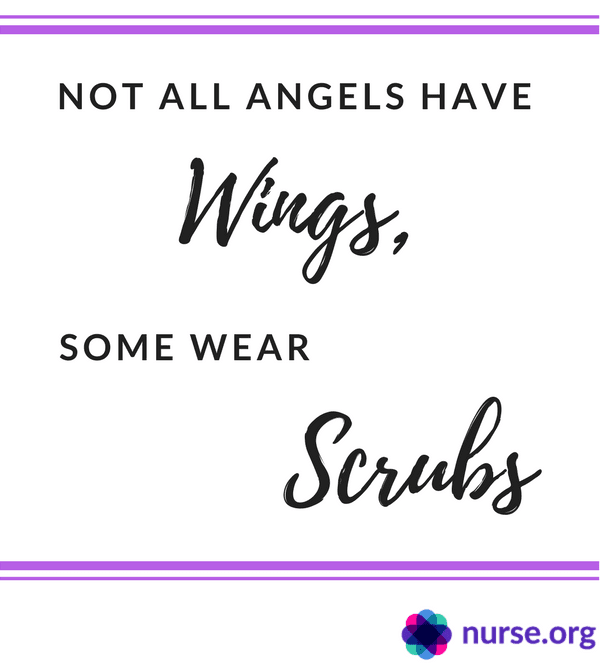