Seattle University is being sued by four nursing students for allegedly offering a Master of Science in Nursing (MSN) degree they were not accredited to offer.

Three of the four students involved in the lawsuit are former students, and one of the students is currently a student enrolled in the Advanced Practice Nursing Immersion (APNI) to Doctor of Nursing Practice (DNP) program at Seattle University College of Nursing.

The APNI to DNP program is for non-nurses who would like to earn a DNP. The program takes four calendar years to complete. Upon successful completion, the student will earn a DNP.

It is alleged in 2020 the university offered students the opportunity to receive their MSN at a certain point within the APNI to DNP program while they worked toward their DNP. However, this had not been approved by the Washington State Nursing Care Quality Commission (NCQAC) when the announcement was made to the students.

In 2021, the NCQAC denied the proposal to offer an MSN but approved a Bachelor of Science in Nursing (BSN) degree for the APNI to DNP students instead. The university was also found to be non-compliant with the Washington Administrative Code because the communication with students did not clarify the MSN opportunity was still pending NCQAC approval.

It is reported the students paid nearly $70,000 for the degree and related expenses. The lawsuit was filed on November 17, 2022.

“Being a graduate student was always my goal,” said Shelby Stephens, a former Seattle University graduate student. “It was years and years of preparation; I did undergrad at UC Santa Cruz to end up going to this graduate school.”

Stephens hoped that obtaining her MSN through the program would increase her opportunities and salary.  After enrolling in the program in 2019 and subsequently submitting her diploma to California, she received a phone call and, “was told by the California Board of Registered Nursing that I didn’t have a degree on my transcript.”

This, in turn, started what could potentially be a multi-million dollar lawsuit. 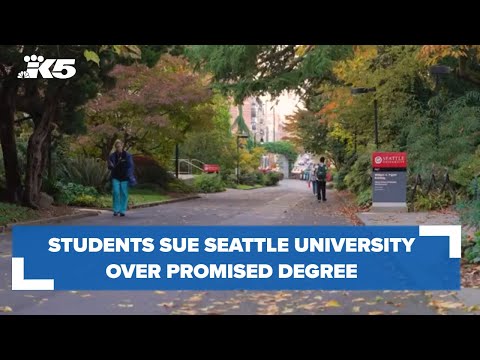 The university issued the following statement related to the lawsuit:

“The university is aware of a lawsuit filed by one current and three former Seattle University College of Nursing students against the university. The lawsuit relates to a proposed 2020 program revision that would have allowed certain Doctor of Nursing Practice (DNP) students to receive a Master’s of Science in Nursing (MSN) degree as they progressed toward their doctorate degrees. The university was accredited to offer an MSN degree, but in the end the Washington State Nursing Care Quality Assurance Commission (NCQAC) did not approve the university’s proposal to offer an MSN degree to these doctoral students, approving a Bachelor of Science in Nursing (BSN) instead. Although the university regrets the way information was communicated to doctoral students in 2020 about the proposed MSN degree, any allegation that the university marketed or advertised the degree with an intent to deceive students is categorically false.”

The full statement by the university can be read here.

Statement From The Attorneys

The Stritmatter Firm in Seattle, Washington, is representing the plaintiffs, along with attorney Patrick Kang of Premier Law Group.

One of the attorneys with Stritmatter Firm, Andrew Ackley, said, “Nursing students represent our future front lines.  They deserve to trust their educators, and so does the public.  Seattle University’s violations of Washington education and consumer laws are an affront to public trust.”

“We knew there had been transgressions, that school had falsely promised an MSN [Master in Nursing] degree. We didn’t know how out of compliance they were with state law,” said attorney Andrew Ackley.

“To not even be able to trust their educators is an affront to our future frontlines and also the public. Their education is monitored by administrative agencies for the protection of the public,” said Ackley.

Nurse.org will continue to follow this story and update as new information becomes available.

You know all nursing jobs aren’t created (or paid!) equally, but do you know which nurses are making the most money in 2023?