3 Killed, 77 Sent To Hospital After Train Derails Off WA Overpass

An Amtrak passenger train derailed off an overpass and onto the busy I-5 highway in southwestern Washington early Monday morning. As of Monday evening, the Washington State Patrol had confirmed at least 3 casualties.

The crash damaged an additional seven motor vehicles on the road. Motorists were injured but none were killed, reported Pierce County Sheriff’s spokesman Ed Troyer. 77 injured people, including motorists, were sent to nearby hospitals with minor to serious injuries. 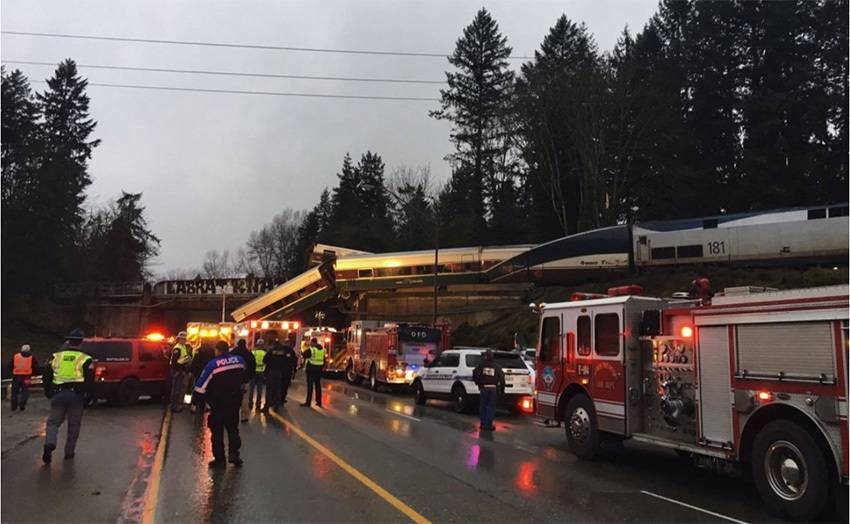 Harborview Medical Center, Seattle’s level 1 trauma center, admitted three victims of the train wreck. All three were transferred from nearby hospitals. One of the injured remains in serious but, stable condition. The other two have been treated.

Eight hospitals from Olympia to Seattle admitted victims of the crash.

Motorist Dan Konzelman reported to King 5 news that he witnessed the train cars jump off the highway overpass. He immediately pulled over to the side of the freeway and rushed towards the scene with a group of other Good Samaritans. The group spent about 25 minutes on the crashed train freeing those who were pinned and leading others to safety.

According to Janet Matkin, spokeswoman for the Washington State Department of Transportation (WSDOT) rail division, the agency does not currently have a theory about the cause of the train derailment.

She stated, “we’re still trying to figure out the cause.”

Bloodworks Northwest tweeted that they are in need of blood donations.

President Trump tweeted about the disaster on Monday,

This is a developing story, Nurse.org will continue to update the article.