Top Cheap and Fast Online RN to BSN Programs in 2023

A beeping IV. A nurse six months into the job. One single punch to the head. A life forever changed.

After only being on the job for six months, Angela Simpson got hit hard on the top of her head by an agitated dementia patient. His IV had stopped infusing which hurt him, and she was trying to help him.

“It shocked me, so I jumped back. He was on his way to punch me a second time,” the Maryland nurse says. Thankfully, she was able to avoid another hit. “It was so alarming and so unnatural. But I felt like I had gone through some christening experience, and I was no longer the new girl,” she says. She considered herself lucky because she walked away with a small laceration on her head.

As a result of her attack and the ongoing violence against nurses and other healthcare professionals, Simpson founded and serves as national director of the not-for-profit Silent No More Foundation.

>> Nurses, take the State of Nursing 2022 survey anonymously and let your voice be heard about issues that matter in nursing.

Little Has Changed Over the Years

Despite this story originally being published over two years ago, not much has changed. Stories continue to emerge across the country regarding healthcare workers that are facing violence not only from patients but also fellow co-workers.

On Monday, October 4th, 2021 certified nursing assistant Anrae James was murdered at Jefferson Hospital in Philadelphia, Pennsylvania while on his unit. According to news reports, 55-year-old Stacey Hayes drove to the hospital around 12:08 a.m. Monday in a U-Haul, walked to the ninth floor wearing blue scrubs and shot James. He has pronounced dead shortly after. Unfortunately, according to Philadelphia Police Commissioner Danielle Outlaw, “the reasons why, at this point, we still don't know.”

In April 2019, Lynne Truxillo, a 56-year-old nurse at a hospital in Baton Rouge, LA, saved another nurse by pulling away from a patient who was attacking her. The man turned on Truxillo, grabbed her by the neck, and struck her head on a desk. She died several days later from complications related to the assault.

At the Northeast Georgia Health System — which has four hospitals in Gainesville, Barrow, Braselton, and Lumpkin — the security response team has been called to intervene and protect a staff member from harm more than doubled from 2019 to 2020 — from 349 incidents to 711. Security reports show notes from a patient pinning a nurse against a door, pressing her head into it. The patient had hurt himself at the same time, and blood spilled onto the floor. Another report documents a patient grabbing a nurse by her wrist and kicking her in the ribs.

The violence extends beyond the U.S. Recently, a Canadian nurse was punched repeatedly by a man because his wife received the COVID vaccine without his knowledge. A nurse working at a retail pharmacy outside of Montreal suffered from multiple cuts and bruises as a result of the attack. 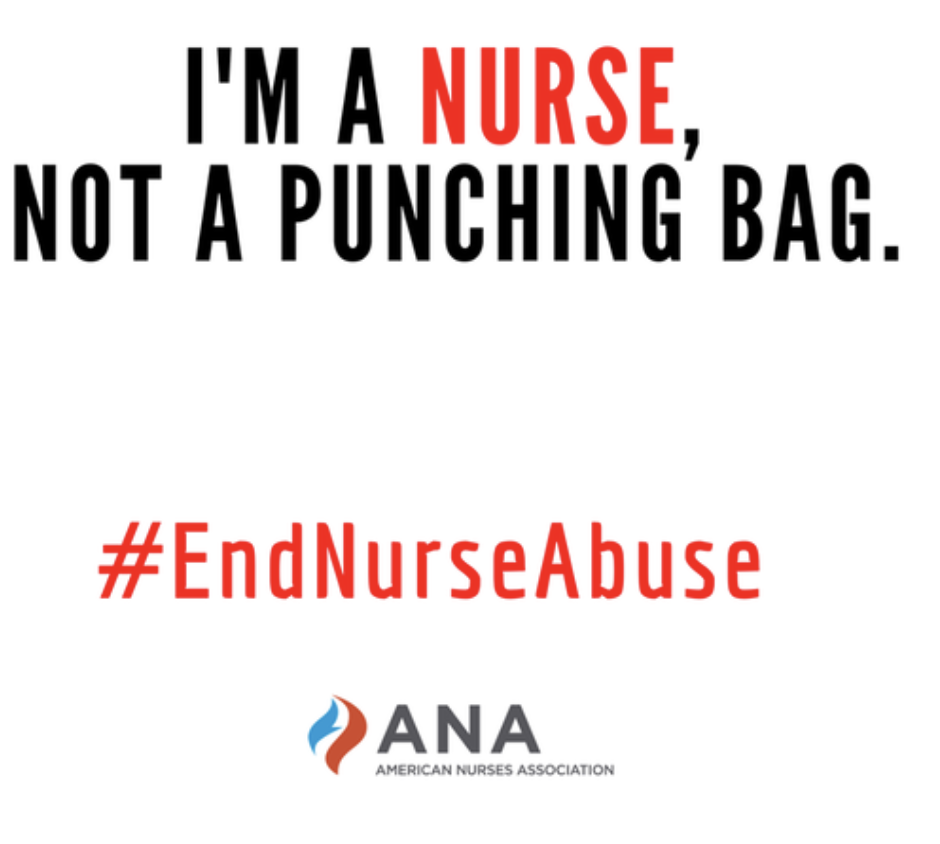 According to the American Nurses Association, 1 out of 4 nurses is assaulted on the job.

She has been building the organization with a growing number of members on the Silent No More Foundation Facebook page and an affiliated Facebook Group Page for more private interaction. Anyone interested can join. 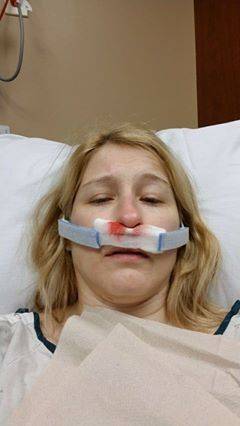 She has gained very committed volunteers who are lobbying state legislators to get more protection laws. She also inspired thousands of interested people to contact their House representatives during the organization’s National Call-In Day on July 10.

Healthcare workers need more Protections and a change in culture

Simpson’s husband works as a corrections officer. She is a registered nurse with a tablet and a stethoscope.

“It is more likely that I will be hurt on the job by an assault than him. He gets to use pepper spray and has a bullet-proof vest, and he has others to back him up. He has the right to defend himself,” she says.

Healthcare workers continually become the subjects of patients, family members, or inmates’ rage, confusion, or anxiety. Studies show over and over again that violence against healthcare workers has become a rising epidemic. This has only continued to increase during the recent coronavirus pandemic. Hospitals are experiencing longer waiting times in the emergency room, are short-staffed, and rationing care which only escalates frustrations.

A recent study found that 44.4% and 67.8% of the nurses reported experiencing physical violence and verbal abuse, respectively, between February and May/June 2020. 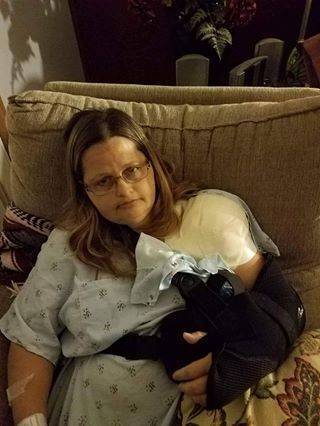 Violence Against Nurses Higher Than Most Professions

The prevalence of workplace violence in health care remains higher than in most professions.

In healthcare, workers provide safety and care for the patients. But they end up in a conflicted situation. They have to decide if they are going to protect themselves or their patients in certain violent situations, Simpson says.

Nurses feel like it is just part of the job to deal with abusive language, threats, and violence. But patients showing signs of agitation or aggression should be identified as high-risk to prevent an act of violence, she explains. 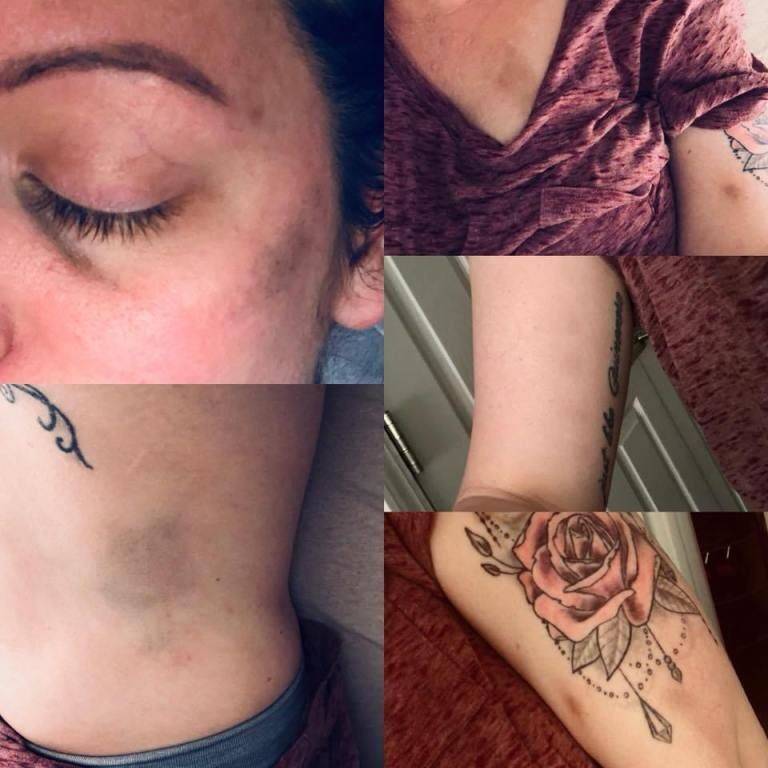 Some of these healthcare workers who become victims of violence actually get accused by their employers for doing something wrong, Simpson adds. Many times, they get disciplined or even fired.

“The first thing they need to do as nurses is to understand that violence is not part of the job. We need a severe culture change,” she explains.

>> Nurses, is you've experienced violence in the workplace, take the State of Nursing 2022 survey anonymously now.

A Tragedy Leads to Action

A tragic story of a nurse in an Illinois hospital became the catalyst for Simpson to create the Silent No More Foundation. The nurse was raped and beaten for hours inside the hospital by an inmate in a hostage situation before the SWAT team fatally shot him. He should have been shackled to the bed. But he wasn’t and managed to take the gun from a security guard.

“It was just a blip on the news. You hardly heard about it,” she says. “This has to stop. We can’t be quiet about this anymore.”

Simpson feels many people just feel that violence against them as healthcare workers is part of the job.

“That is so wrong. If something happens to you at work that would be otherwise intolerable if it happened to you on the street such as someone groping you, you would contact the police,” she states.

But she has heard from many people who state that some healthcare facilities won’t allow their employees to file a report or call the police.

She hopes her organization will see things happen by fighting safety in the workplace through advocacy, prevention, legislation, and education.

Six steps nurses should take after being attacked

Simpson points out that nurses and others need to be able to protect themselves if they feel their life is in danger. Here are her suggestions if you are threatened:

By joining organizations such groups as Silent No More Foundation and their activities, the public can get the word out even faster than just those in healthcare. She also encourages everyone to reach out to their state representatives to demand better laws protecting healthcare workers, Simpson says.

Simpson’s group is currently working on legislation, on a state-by-state basis to obtain basic legal protections for those in the healthcare professions.

The legislature proposed the following,

While Simpson continues to advocate for legislation there has been some progress as the media continues to shed light on violence against nurses and other healthcare professions. Nursing associations support the passage of the Workplace Violence Prevention for Health Care and Social Service Workers Act of 2021, a bill recently reintroduced in the U.S. House of Representatives. The legislation would require health care and social service employers to put in place comprehensive workplace violence prevention plans, including procedures to identify risks.

Recently, Cox Medical Center in Branson, Missouri provided all nurses and ancillary staff with panic buttons that are installed on an ID badge. This button allows hospital employees to alert security if they are in imminent danger.  If the button is pushed, it activates a personal tracing system, security is notified and an alert on hospital computers shows the employee's location.

According to hospital officials, between 2019 and 2020, assaults by patients tripled and the resulting injuries were increasingly life-threatening. Funding to implement the panic button system comes from a grant of more than $132,000 from a local charity, the Skaggs Foundation, which helps provide funding for medical projects in the region.

The truth is that violence against healthcare workers will always be a major concern for the profession, especially in emergency rooms. However, there are steps that individuals and healthcare systems can take to help keep the environment as safe as possible but also allow nurses the ability to report the events. New laws are in the process of being enacted and harsher penalties are enforced against those that harm healthcare workers. Nurses are there to save our patients - not each other.

You know all nursing jobs aren’t created (or paid!) equally, but do you know which nurses are making the most money in 2023?

Top Cheap and Fast Online RN to BSN Programs in 2023