Get the latest news for nurses
INDUSTRY
August 30, 2017

Disaster Relief Nursing: Everything You Need To Know About This Heroic Specialty

Luis DeRosa, a Trauma Resuscitation Nurse and Federal Disaster Response Team Member, was preparing to give a speech in front of hundreds of nurses at a conference in Miami when he received orders to deploy immediately to Texas. He would be one of the first responders providing medical aid to those affected by Hurricane Harvey.

“This is a big sacrifice for me...leaving my family. I even had to cut my speech in half at the Miami Nurse Expo in order to catch my flight in time! But, this is what we do as healthcare providers. Help others!” stated DeRosa.

"My team will deploy around Texas. We'll be the only team there surgical capabilities providing onsite procedures to the most critical of patients. Pretty cool stuff." said DeRosa.

What is the Federal Disaster Response Team? The highly specialized Federal Disaster Response Teams are deployed rapidly to aid cities, states, or countries during man-made or natural disasters such as the Haiti earthquake and Hurricane Katrina. They consist of highly trained professionals from multiple disciplines.

DeRosa is a member of one of only three International Medical Surgical Response teams in the nation. These teams represent the southern, eastern, and western regions of the country and are overseen by the National Disaster Management System. As an employee of Jackson Memorial Hospital's Ryder Trauma Resuscitation Unit in Miami, DeRosa represents the trauma critical care team - south and FIU Florida Disaster Response (FAST) teams. He is also a member of the Disaster Medical Assistance Team.

“What an amazing time to be a healthcare provider on such a prestigious team and doing good for those in need. This career has taken me places and allowed me to work with so many special people” stated DeRosa.

The team consists of highly skilled surgeons, nurses, paramedics, respiratory therapists, firefighters and other medical professionals. These professionals come from hospitals throughout the country.

A Look Inside The Disaster Response Unit

DeRosa shared this video from inside his disaster response training. The video shows “what medical teams do and how they look inside those tents. The video is simulation training of a mass casualty incident where thousands of people were injured, this unit was the critical care component of the simulation.” DeRosa said. 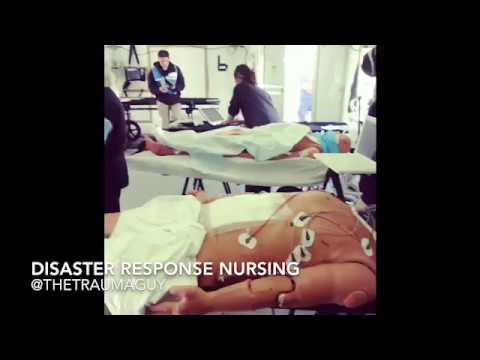 DeRosa’s advice to those interested in joining the Federal Disaster Response, “get those fancy certifications and keep on training. You definitely need quality experience to be considered for these teams. Stay focused - your time will come!” DeRosa encourages donations to those affected by Hurricane Harvey and says, “if you want to help out or donate please make sure you donate to a vetted organization.”

With over 16K followers, Luis DeRosa is the nurse behind the popular instagram account @thetraumaguy. He utilizes the platform to show a look into his life as a Trauma Resusitation Nurse, Medic and Instructor at one of the busiest trauma centers in the nation. Follow his journey as he saves lives and inspires us all!