This 8 Month Long Nurse Strike Has No End In Sight

Massachusetts might be known for something more sinister this time of year as the spooky town of Salem gears up for Halloween, but at a small hospital in Worcester, history is being made.

Over 700 nurses walked off the job on March 8th, 2021 at Saint Vincent Hospital and the ongoing nursing strike is actually the longest one in the state’s recorded history and the longest one the entire country has seen in over 15 years. The 381-bed hospital originally founded by Catholic nuns in 1893 is now a for-profit hospital owned by Dallas-based Tenet Corporation and the nurses are striking as a result of allegations that hospital administration have put profits over patient care.

As the strike entered into its 8th consecutive month in October, no signs of an agreeable resolution have emerged. In fact, according to the Massachusetts Nurses Association (MNA), Tenet Healthcare has “doubled down” on “unseemly attempts to abuse, attack and retaliate against nurses, and to endanger the communities it serves by announcing that they are declaring an impasse in their negotiations with the nurses.”

The MNA also noted that Tenet is “ceasing all efforts” to reach an agreement and to date, the company has spent more than $100 million by allowing the strike to continue. In response, Saint Vincent said that they had put out their “last, best and final offer” and that they are “disappointed” in the MNA and the nurses holding this “indefinite” strike.

What Caused the Strike?

This is actually the second strike that has happened at Saint Vincent. Nurses were also forced to strike for 49 days back in 2000, only three years after Tenet first acquired the hospital. Interestingly, the main reason the strike ended after only 49 days was because the late Senator Edward M.Kennedy joined nurses on the picket line and brought both sides together in Washington, D.C. He started a day of shuttle diplomacy that led to an agreement and that broke the strike. Interestingly, the language that he developed on mandatory overtime was later used in many nursing union contracts around the country.

Other Tenet facilities, from Michigan to California, have also been accused of unsafe practices.

In May earlier this year, California congresswoman Kate Porter and Connecticut Representative Rosa DeLauro even penned a letter to the Federal Trade Commission and Department of Health and Human Services imploring them to investigate Tenet for misusing federal COVID funds in order to expand business instead of actually helping patients and staff.

The letter pointed out that the $1 billion Tenet received from the CARES Act funds just so happened to coincide with the company purchasing 45 new surgery centers that same year–for $1.1 billion. The letter also detailed horrifying conditions nurses and patients had faced at Detroit Medical Center’s Sinai Grace hospital, where nurses were forced to care for as many as 20 COVID-19 patients at a time, the ER ran out of oxygen completely, and dead bodies were propped upright in chairs.

Strike allegations also include mention of Tenet’s for-profit system. For instance, as DeLauro’s letter pointed out, the company posted a $414 million profit and $2.5 billion in cash reserves at the end of 2020––yes, billions. That amount was more than double the cash reserve the company has posted in any quarter prior. Tenet also had a $97 million profit in the first quarter of 2021, and in the past year, their stock price has increased more than 150%.

Additionally, it appears that Tenet purposefully tried to punish striking nurses by delaying health insurance benefits available to them. For instance, although Congress included a provision in their stimulus package for unemployed and striking workers to have access to subsidized COBRA health insurance benefits, Tenet waited until the deadline to send in the required documentation, forcing striking nurses to have delayed access to life-saving care for their own families.

As of October 14th, local news outlet Jacobin, reported that Tenet had agreed to take measures to improve staffing, but also took one major disciplinary action: they are refusing to give any nurses that participated in the strike their specific jobs back.

The step comes after Tenet tried in August to do the same, offering staffing improvements, but at the last minute, insisting on a return-to-work agreement that would result in displacing the striking nurses. That agreement was ultimately refused by the nurses. As a result of Tenet now trying twice to punish striking nurses, the nurses have included a return-to-work agreement that includes reassurance they will get their old jobs back, a measure St. Vincent and Tenet are standing firm against.

NBC News reports that Tenet’s CEO Carolyn Jackson said the hospital would not give back the positions that replacement nurses "bravely took during the strike” and said that as a result of the strike, some positions had been permanently eliminated as the hospital had been forced to close services. Jackson also said that she believed the strike was just a front for the MNA to pass minimum safe staffing ratios after the union’s efforts to do so statewide had failed in 2018.

"If every hospital across the state went to a 4-to-1 ratio, you wouldn’t have enough nurses," she told NBC News. "It would exacerbate an already challenging nurse staffing crisis."

On September 4, Saint Vincent hospital also released a statement on Facebook saying that they “reaffirm” their commitment to the permanent replacement nurses who they hired as the strike approached seven months. They defended their position and said that the MNA’s guidelines also detail that in the event of a strike, no nurse is guaranteed to have their job back. 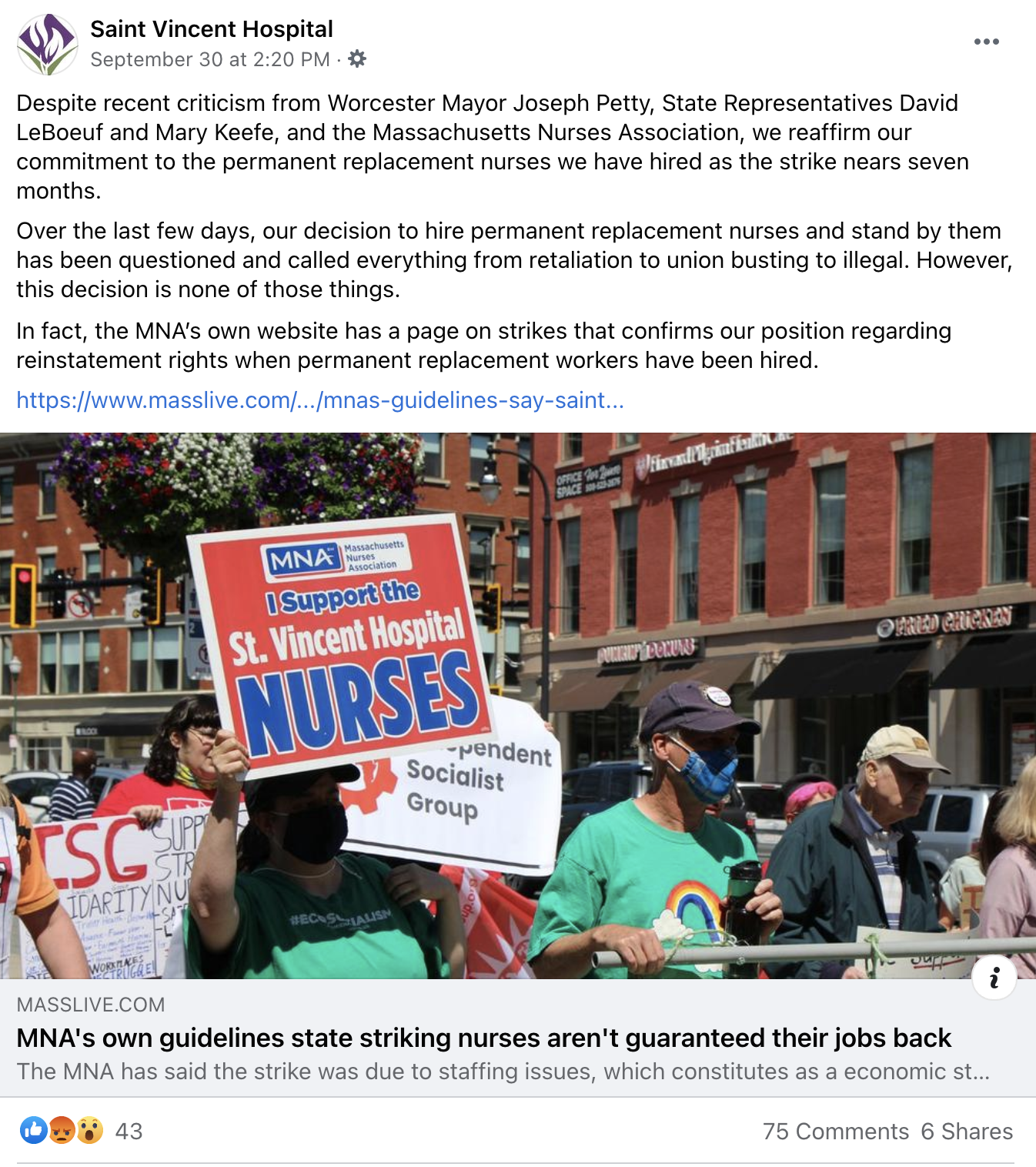 According to the MNA, the strike is continuing and in fact, the nurses are even upping their attempts to hold Tenet accountable. The MNA reports that the nurses have now filed a total of ten unfair labor practices for the company’s actions both before and during the strike that include:

Inside the hospital, it appears that patient care has greatly suffered. The MNA reports seeing a “dramatic” increase in flight helicopters coming from the hospital as patients of all ages are forced to be transported to other hospitals due to a lack of adequate care from replacement nurses. Raymond V. Mariano recently penned an op-ed in the Telegram detailing the poor experience his sister had when she was admitted, including when his family member witnessed patients lying in hallways and no one around to help but a stray cleaning lady.

“There are several hundred vacancies posted, and the numbers of vacancies has increased not decreased, which is a sign that they are having trouble recruiting nurses, and that nurses are leaving due to the conditions inside,” Marlena Pellegrino, a longtime nurse from Saint Vincent and co-chair of the nurses local bargaining unit said in a statement with MNA. “We have verified reports of newly hired nurses choosing to leave after experiencing the condition inside the hospital, including one floor where nearly every newly hired nurse left within a few weeks.  We have also received reports of those few strikers who crossed over in recent weeks now leaving for other facilities.”

As the strike goes on––and joins other nursing strikes across the country in what has been dubbed “Striketober”––vocalized local and official support for St. Vincent nurses is growing.

Last month, both Massachusetts Gov. Charlie Baker and Mayor Joseph M. Petty spoke out in support of ending the strike. Mayor Petty released a statement in support of the nurses and detailing how the strike is affecting patients’ lives. He praised the nurses, pointing out that the nurses are the ones who have cared for the community for decades and “risked their lives and their families’ lives” to work through the pandemic.

“It is my understanding that the nurses are ready and willing to reach an agreement and are desperate to return to their jobs,” Mayor Petty said in the statement. “Tenet Healthcare is demanding that these nurses end this strike with no guarantee that they will retain their previous positions or a commitment that they can return to work without fear of retaliation. These demands are unprecedented and violate the standard practice in any and all strikes and the high labor standards that we expect from all employers in our city. As our city's Mayor, I believe in the right of all workers to make a stand for better working conditions, including the right to wage a lawful strike.”

The Mayor also called on the corporate head of Tenet Healthcare in Dallas, Texas to put an official end to the strike:

“Let me be clear, this strike needs to end and it needs to end now,” he said. “Because the local leadership of the hospital seems incapable of negotiating an equitable end to the strike, I hereby call upon Dr. Saum Sutaria, the corporate head of Tenet Healthcare in Dallas, to come to Worcester as soon as possible to negotiate in good faith.  I am asking that he and the Tenant team work with our nurses to resolve all issues in this dispute, so we can address the needs of our community and end this crisis.”

The National Union of Healthcare Workers has also gotten involved, calling on Speaker of the House Nancy Pelosi to help end the strike.

“This is a righteous strike with only one goal — to ensure safer working condition to better protect their community, which is being waged against Dallas-based Tenet Healthcare, a heartless and ruthless for-profit corporation that has spent well over $100 million to force and prolong this strike at a time when COVID-19 is surging and overwhelming facilities in Worcester and throughout Massachusetts,” the letter stated.

Labor experts have also sided with the nurses. For instance, Steve Striffler, a professor of anthropology and director of the Labor Resource Center at the University of Massachusetts Boston, pointed out that it is “unheard of” for an employer to refuse to give back striking employees their jobs.

On Facebook, the support for Saint Vincent nurses is also strong. One nurse pointed out that even if Saint Vincent refusing to give the striking nurses back their jobs isn’t technically illegal, it’s just not a good look from a hospital whose nurses have dedicated years to working in.

“It's absolutely retaliation in an attempt to union bust and while it may not be illegal, it certainly does not show any appreciation for the nurses who have dedicated their careers to Saint Vincent Hospital. Very poor representation of leadership, morale and integrity,” wrote Curry Beaudette, a Registered Nurse at UMass Memorial Medical Center. “The legacy of destroying Saint Vincent Hospital is all you're doing here. And once this is over, you'll be gone and the nurses and staff will be left to fix all that is broken. It's a real shame…”

Unfortunately, with no end in sight the strike at Saint Vincent’s continues on and the hospital continues to rely on nurses crossing the picket lines as well as new graduates to fill vacancies. Hospitals in the surrounding areas are feeling the burden from the strike.

Nurses from Saint Vincent that are willing to share their stories, please feel free to reach out to Nurse.Org at