Nurses Are Going To Protests, After Work, To Help Injured People

Following the death of George Floyd, simultaneous protests across the country have been taking place with supporters demanding justice for Floyd and speaking out against police brutality.

As if the COVID-19 pandemic hasn’t already tested the resolve of the nursing profession, nurses are now stepping up to aid injured protesters. Many are even coming out after their 12-hour shifts to show support and help those who need medical care.

The protests across the United States over the last week, coupled with a global pandemic has been stressful for so many. But some say there is an opportunity for change.

“For nurses of color working on the frontlines, it’s disheartening to still realize that you’re living in a country where you’re under-appreciated and judged, first, on the color of your skin, rather than the content of your character,” she told Refinery 29. “And you have to recognize that the concern with the death in Minnesota is just now emerging as one stressor on top of the many stressors of the pandemic.”

Most protests have remained peaceful, however, some have resulted in violence with shooting with rubber and real bullets, tear gas, pepper spray, and physical force. Nurses are arriving at the scene with aid where they can.

Here are a few of the ways nurses showed heroism, support, and care during the #BlackLivesMatter protests over the last week. 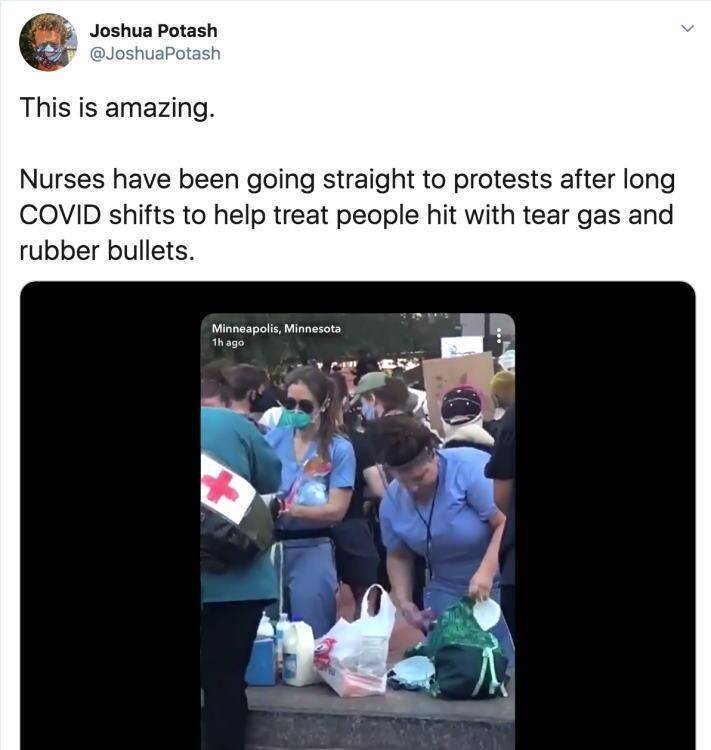 During a protest at Government Center Plaza in Minneapolis on May 29th, nurses left their shifts and headed straight to the protests to help injured protestors.

Some of the supplies shown in the video included gallons of milk to help treat pepper spray or tear gas victims, and water bottles.

“This is amazing,” he said. “Nurses have been going straight to protests after long COVID shifts to help treat people hit with tear gas and rubber bullets.”

A Minneapolis CNA helping an injured patient in a medical tent in Minneapolis says she was fired on with rubber bullets.

Right after the incident, through tears, she stated on a news video, "I was trying to look at the wound and they were shooting at us.” She said the wounded man “tried to protect her” and finally she left.  "I told him I wouldn't leave him, but I did. I feel so bad. They were shooting. I was scared," she told CBS News affiliate WCCO. 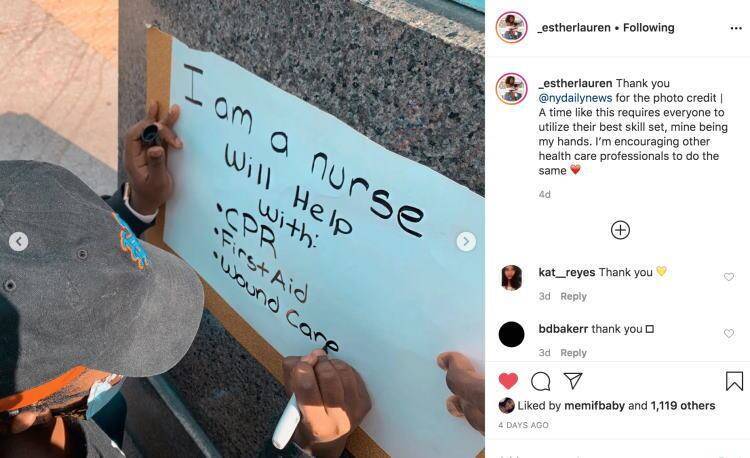 Lauren told a local Queens newspaper that she has been working non-stop assisting COIVD-19 patients for several months, but she wanted to find a way to support the movement.

“It doesn’t make sense when you’re someone who is always working with your hands, to just sit at home,” Lauren said. “My best skill set is my hands and nursing people back to health. That’s literally what I do for a living. So I said, ‘you know what, I’m going to get involved, and just help in that aspect, use the resources that I have and the knowledge that I have to do that.'”

Lauren further stated that she felt compelled to help so that protesters can avoid going to hospitals or medical centers where black patients are “disproportionately disadvantaged.”

“I think specifically for me, I’m not in a place to tell anyone how to protest or how to take out their frustrations, I’m just here to help them medically,” she said. “I think people should be finding their role and knowing how to play it very well. I know that I am a nurse, and my role is to be a nurse at all times. Everyone should just be figuring out what role they want to play in this and how they can play it very well. Not everyone has to go out on the field, but everyone has to play a role in some way.”

Medical professionals gathered on the lawn of Long Island Jewish Medical Center on Friday, June 5, 2020 in solidarity with the protesters as the hashtag #whitecoatsforblacklives went viral. This video was shared with us by @insidelij

Donte White, a registered nurse and Milwaukee native, was peacefully protesting last Friday against police brutality against people of color, including the killing of George Floyd. But as the protest began to turn violent by people he says “didn’t actually live in the area,” Floyd said he didn’t want to “watch his neighborhood be destroyed.”

“We still have to live in this community,” White told local news. “You know, people use Walgreens, and to see them just destroy it like that, it was awful.”

White started filming activity on a Facebook live video because he wanted to make people aware of what was happening.

"I remember hearing people talking about, 'Well, let's burn it down.' And I remember individuals going in there and they were starting a fire," White said. "And I'm like, 'Okay, I use this Walgreens. My family has used this Walgreens, and I know other people in the community are also using this for small groceries. There's a pharmacy in Walgreens, and people couldn't get their medication."

White stated that he felt like it was his responsibility as a community member to put the fire out.

He added, “I was picking up whatever, you know, bottles I can see on the ground that people have looted and they have dropped while they were looting, and just trying to throw whatever I can on these fires to put them out. I picked up a can of Pepsi or Coke, and just started throwing it on there.

Unfortunately, after putting out the fire and walking out of the Walgreens, White stated he was met with a “face full of tear gas or smoke.”

As a nurse who has already been working long hours to help his patients during the coronavirus pandemic, White stated that he “worries” that the looting and violent events will change the message that peace protestors were attempting to make.